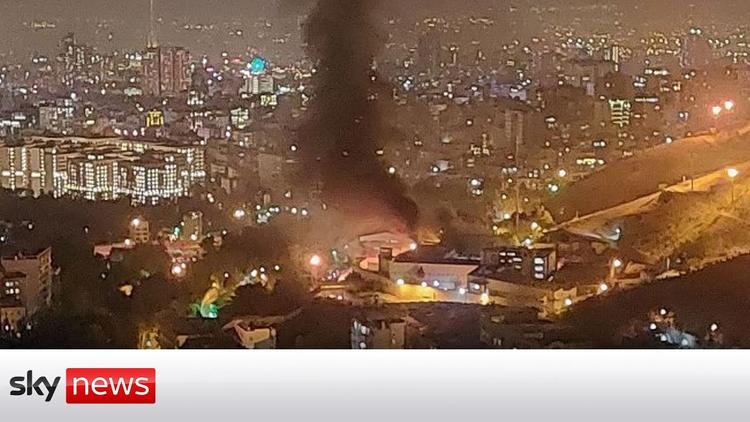 Ann Arbor (Informed Comment) – Dubai-based Al-Arabiya assembles Tweets from Iran about the prisoner uprising at Iran’s maximum-security prison, Evin, which led to the outbreak of a major fire on Saturday. The facility holds political prisoners, including foreigners. Interrogations there have routinely involved torture. Despite government claims that the fire had been extinguished on Saturday evening, it went on burning into early Sunday morning according to the videos. Family members of the prisoners were frantic with worry over their safety.

The pro-government Iranian Students News Service reports that the prisoner uprising began at an entrepreneurship workshop being offered to inmates guilty of embezzlement and other forms of theft. They appear to have attacked their guards. There was also a workshop on tailoring going on in the financial crimes block, and somehow in the midst of the melee a fire broke out there in the piles of cloth.

We cannot, of course, accept the accounts of such pro-government sites at face value. It may be that they wanted to stress that embezzlers and thieves, rather than political prisoners, were behind the fire in order to make the rioters less sympathetic to Iranians.

On the Iranian Twitter feeds, many posters brought up the possibility that the government had itself set the fire at the prison. They compared it to an infamous movie theater fire in 1978 that people became convinced was the work of Mohammad Reza Shah’s secret police, in an attempt to blame it on the protesters then criticizing the shah’s government.

Other reports say that the inmates deliberately set the fire in a place where spare uniforms were stored.

In this video that has been taken at 2:00 am, gun shots still can be heard from inside Evin prison.#MahsaAmini #IranRevolution#مهسا_امینیpic.twitter.com/Hs5can75Rt

A major battle between inmates and security forces appears to have raged into the night. In the videos posted online of the fire, gunfire and explosions can clearly be heard.

Authorities claimed to have put out the fire by Sunday morning.

The Saudi-backed Iran International reports that videos posted to the internet show that on Saturday demonstrations were staged, as well, by youth in Tehran, Ardabil, Kermanshah, Hamadan, Rasht, Karaj, Isfahan and several cities in Iranian Kurdistan.

VOA reports that “In the city of Sanandaj, a hotspot for demonstrations in the northern Kurdish region, schoolgirls chanted, “Woman, life, freedom,” down a central street.”