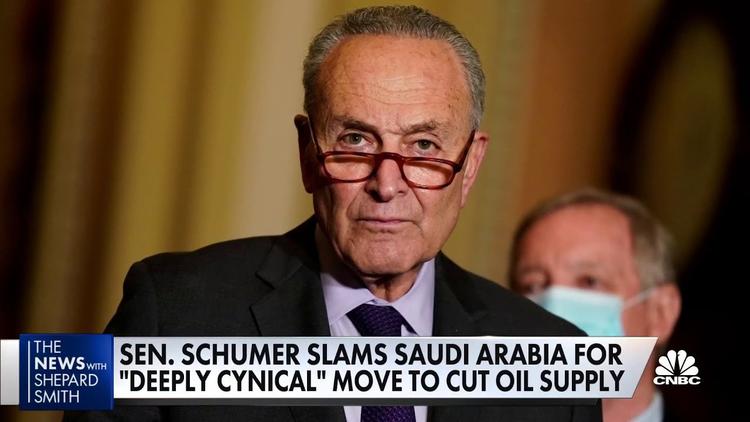 ( Middle East Monitor ) – Amir Hossein Zamani Nia, Iran’s OPEC governor, announced when he left a meeting with representatives of the 13 member states of the Organisation of Petroleum Exporting Countries (OPEC) and their ten allies – known as OPEC+ – the decision to reduce oil production by two million barrels per day for November.

The initial reactions to the large production cut were hysteria. One American journalist asked the Saudi Minister of Energy, Prince Abdulaziz Bin Salman, if he was worried about the American reaction to the production cut. He sarcastically told her to enjoy the sun in Vienna; a clear indication of the difficulties that Europeans will face next winter.

The American reactions to the decision of the OPEC+ countries were quick and distinct. White House press secretary Karine Jean-Pierre commented on the decision by saying it was clear that the OPEC+ alliance was “aligning with Russia” and was making a “short-sighted decision” to reduce oil production at the height of the conflict in Ukraine.

White House National Security Adviser Jake Sullivan noted that US President Joe Biden was feeling “disappointed” with the decision of the OPEC+ alliance to reduce its oil production.

The reactions confirm President Biden’s failure to manage the sanctions against Russia and the dismantling of the OPEC+ alliance, whose decisions ruined the ambitions of the US administration, the US Treasury, and the Federal Reserve to fight inflation and reduce interest rates.

The OPEC+ alliance has once again proven its strength and the unity of its countries, which include Iran, Saudi Arabia, the UAE and Russia. Despite the disparity, competition and conflict between its countries, the OPEC+ agreement exceeded the limits of technical performance confirmed by UAE Energy Minister, Suhail Al Mazrouei, when his country announced it was joining the efforts to reduce production. Its geopolitical reach extended from the Gulf and Yemen to the Red Sea and the Mediterranean.

The agreement that included regional opponents such as Iran, Saudi Arabia and the UAE, and international sponsors such as Russia, stressed the geopolitical dimensions as it coincided with a meeting held by the Russian President’s Special Envoy to the Middle East and Africa, Deputy Foreign Minister Mikhail Bogdanov, on Wednesday evening with the Emirati Ambassador to Moscow, Mohammed Ahmed Al-Jaber, to discuss the situation in Yemen and the Gulf region after the expiry of the deadline for the truce agreement in Yemen on 2 October.

This meeting came at the request of the Emirati ambassador and coincided with threats made by a member of the Political Bureau of the Houthi movement, Muhammad Al-Bakhiti. He said: “We have the ability and the courage to strike the Saudi and Emirati oil facilities if our demands are not met.”

The meeting with the Emirati ambassador coincided with a press conference held by the US special envoy to Yemen, Tim Lenderking, during which he discussed his country’s position on renewing the truce in Yemen between the countries of the Arab coalition, led by Saudi Arabia and the UAE, and the Houthi group. The US official held the Houthis responsible for hindering the reaching of an agreement without providing practical solutions for resuming the truce or dealing with Houthi threats.

These actions and movements confirm the connection between the regional files and their connection to the international mediations led by both America and Russia in Yemeni. Saudi Arabia and the UAE view the OPEC+ agreement as a trump card and a comprehensive framework that allows activating mediations and truces in Yemen, with the positive and consensual atmosphere it provides, which the Biden administration was unable to provide. This is despite its frequent talk about security cooperation in the Red Sea and the Gulf and naval and air manoeuvres, but it quickly turned into a political and economic framework that serves Israel and its interests more than it serves the interests of Riyadh and Abu Dhabi.

OPEC+ has shifted from a technical framework to an emerging economic and geopolitical framework; fuelled by the Ukrainian war and Russian demands. The tense American reactions deepened the Arab Gulf states’ mistrust of the American partner, which repeatedly failed to deal with the Yemeni and Iranian file. It also failed to deal with the economic requirements of the Gulf states and their political and cultural specificity, which put them in conflict with the powers of the region and threatened their political and religious legitimacy.

Hazem Ayyad is a Jordanian writer and political analyst specialising in Arab and West Asian affairs. He holds an MA in political science having completed a thesis on the law of the sea and fisheries.