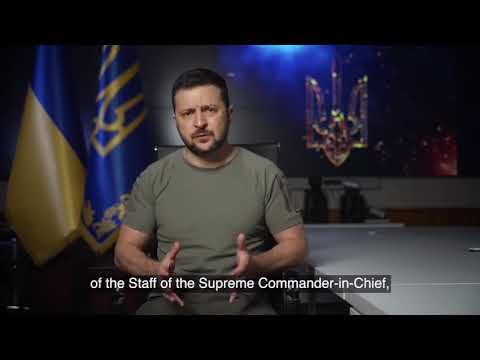 Ann Arbor (Informed Comment) – Ukrainian President Volodomyr Zelensky lambasted Israel on Monday, saying that the latter’s refusal to provide Ukraine with anti-missile defenses and its neutrality on the war had permitted Iran and Russia to deepen their ties, with benefits for Iran’s nuclear enrichment program.

The “Zelensky Official” channel at YouTube made available a clip of Zelensky’s remarks to an online Haaretz Democracy Conference with English subtitles.

Zelensky told his Israeli audience that every time Israeli security comes up, one hears the term “Iran” and “Iranian.”

He noted that on October 19, fifteen Russian cruise missiles targeted Ukraine’s civilian infrastructure, which he characterized as “terrorist attacks.” He said, however, that at the same time 42 Iranian drones were in Ukrainian skies. They hit power plants, other civilian infrastructure, and even residential buildings, he said, adding that One Iranian drone took out half of a residential building in Kyiv, a 120-year-old building erected by a Jewish entrepreneur that had stood through two world wars. There were six civilian casualties, including children.

Zelensky revealed that Ukrainian intelligence had concluded that Russia bought 2,000 Shahed drones from Iran, in addition to Iranian missiles and other types of drones. He said that Iranian trainers had come to instruct the Russians on the use of these weapons.

How, he asked, did this Moscow-Tehran axis form?

He said that Russia was losing the conventional war on the battlefield, but that Ukraine lacked an air defense system such as Israel’s “Iron Dome.” This gap in Ukrainian defenses encouraged Russia to deploy an air war against Ukraine, after its losses on the ground. In 8 months of war, he observed, Russia had deployed 4500 missiles against all major Ukrainian cities and against crucial infrastructure. Russia’s use of these weapons was so extensive, he said, that their stockpiles were running low, and hence Russia sought inexpensive ways of replenishing its arsenal from neighbors. It found them, he said, in Iran.

Now Zelensky turned to how Russia would pay Iran for these drones and missiles. He dismissed the notion that Iran was interested in money. Rather, he said, Iran wanted in remuneration Russian technical help with its nuclear enrichment program. That, he insisted, is the meaning of this alliance.

Zelensky described how, whenever he met with allies, he pleaded with them for anti-missile defenses, and some were forthcoming.

The country that was not forthcoming on this score, Zelensky named as Israel.

He argued that if Israel had not pursued a path of neutrality between Russian and Ukraine and had not rejected Kyiv’s requests for the Iron Dome defense system, Russia would have been foiled in its war of attrituion from the air. It would then have had no reason to go to Iran for further missiles and drones, and would have had no reason to offer Iran anything in exchange.

According to BBC Monitoring, he asked, “Isn’t it time for your state to choose who you are with? Either with the democratic world, which is fighting side by side against an existential threat to its existence, or with those who turn a blind eye to Russian terror even when, at the cost of continuing terror, global security is completely destroyed?”

Zelensky’s argument for Israel’s Iron Dome anti-missile system is clever but flawed. He depicted Ukraine and Israel as having the same enemy, Iran. He warned that Israel’s refusal to help Ukraine had encouraged Russian missile attacks and had caused Russia to turn to Iran when military supplies got low.

Thus, far, his argument has a certain logic. Then, however, he went off the rails by trying to scare the Israelis into thinking that the Russians are helping Iran with its civilian nuclear enrichment program with an eye to encouraging Iran to militarize the program and to construct a nuclear bomb.

Russia does not want Iran to have an atomic bomb any more than the US and Europe do. Russia’s commitment to the 2015 nuclear deal between Iran and the permanent members of the UN Security Council was underpinned precisely by Moscow’s desire to see the Iranian nuclear genie put back in the bottle.

Moreover, Iran is strapped for cash because of the U.S. economic and financial blockade on the country, and millions in rubles would be very welcome in Tehran.

So maybe the Iranian involvement in Ukraine could form a stronger security bond between Ukraine and Israel, and Zelensky is clearly pushing that line. But the notion of Russia helping Iran get the bomb is frankly daft.

As for Israeli leaders, they are highly unlikely to take sides in the Ukraine War. They need to stay on the good side of Russia because that country now has an important position in Syria. Russia allows Israel to hit Hezbollah in Syria when the Shiite party-militia goes beyond partnering with Russia in defeating Sunni fundamentalist rebels that also endanger Israeli security. But that Russian stance could change and it could back Hezbollah against Israel, which is Tel Aviv’s nightmare.