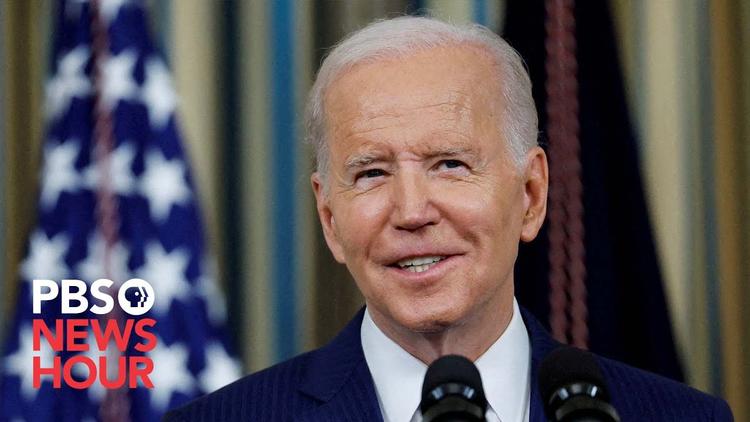 He noted the ravages of the human-caused climate emergency on the African continent, including deadly drought in the Horn of Africa, floods that displaced over a million people in Nigeria, and the increasing potential for conflict between herders and farmers as herding routes are forced to change.

Biden also touted his own administration’s legislation, including the Infrastructure Act, which pays for 50,000 electric car chargers throughout the country and the building out of high density wires that will carry clean electricity to where it is needed.

As for his Inflation Reduction Act (IRA), Biden said,

It includes less than I asked for, but a significant amount: $368 billion to support clean electric en- — clean electri- — electricity, everything from . . . offshore wind to — to distributed solar, zero-emission vehicles, and sustainable aviation fuels; more efficient electrified buildings; cleaner industrial processes and manufacturing; climate-smart agriculture and forestry; and more.

The president noted that the US Department of Energy estimates that the IRA will reduce carbon dioxide emissions by about 1 billion tons in 2030.

He pointed to new government investment in batteries and other green technologies, with its potential to spark a revolution in this field, with positive implications for the whole world.

Biden apologized to the audience for the Trump administration decision to pull out of the Paris Climate Accord, but recalled his establishment of the Major Economies Forum to promote the fight against climate change.

Biden was able to speak with authority to the annual international climate summit, where many countries have made insincere pledges over the years, because despite his slim margins in Congress and the Senate, he was able to pass major green energy legislation. China is still the leader in the turn to green energy, but at least now the U.S. is also poised to become a leader rather than a dead weight dragging the world down into a climate apocalypse.

Biden’s appearance at the summit came the same week as the draft Fifth Annual US National Climate Assessment (NCA) was released for public comment.

The authors of the NCA point out that the climate emergency endangers all the things Americans most love, threatening our homes, neighborhoods and loved ones.

Since the 1970s, there has been a marked acceleration in the cause of climate change (human- caused greenhouse gas emissions) and its effects, including increasing temperatures (Figure 1.2), rising sea levels, melting ice, ocean warming and acidification, changing rainfall patterns, and shifts in timing of seasonal events. Human activities have increased the frequency and intensity of many extreme events, as well as the likelihood of sequential and concurrent extreme events. Many climate conditions and impacts being experienced today are unprecedented for thousands of years . . . These trends are projected to continue over the next decade even if greenhouse gas emissions fall substantially, leaving the country no choice but to adapt to a changing climate.

One danger the Assessment points to is compound climate events. That is, global heating has made droughts more common. But the very areas struck by drought are also more vulnerable to the outbreak of wildfires. People in some regions therefore do not face a single extreme-weather phenomenon caused by the climate emergency but rather multiple such events at once or serially. Not only are droughts often followed by massive and destructive wildfires but heat and drought can also trigger algal blooms in nearby bodies of water, causing mass die-offs of the marine life on which fishermen depend. The compound climate disaster in the US Northwest in the summer of 2021, the report says, “caused damages exceeding $36 billion.”

Low-income neighborhoods, with their typical lack of tree cover, suffer more from global heating than others, so that there is a class dimension to these problems.

In every region of the country the menace took a different guise. The Northeast and Midwest have faced debilitating floods. Warm air can carry more moisture, enhancing the chances of downpours that turn into floods. In the Southwest and West, droughts and wildfires have cost the country $291.1 billion in the past 40 years. Coastal regions have seen rising sea levels and flooding, and the invasion of fresh water aquifers by salty sea water. And we are only at the beginning of these serious climate change effects.

The Assessment foresees increased displacement of Americans by extreme weather, by heat, wildfires, drought and flood. Millions could be put on the road in this way. These extreme weather events will also disrupt agriculture and increase the number of Americans who are food insecure. They will disrupt infrastructure, causing loss of electricity or heating to millions of homes and businesses. They will imperil the economic growth that Americans have come to take for granted.

Biden’s international leadership on the climate challenge is welcome. He is only too well aware, however, that it is not only “those people over there” who are endangered by these dramatic changes, cause by our spewing carbon dioxide and other greenhouse gases into the atmosphere. Americans will increasingly see profound challenges to their ways of life because of the human-made climate emergency. With Biden at the helm, at least we have a leader who understands the challenge, and can empathize with the victims, and will work toward resilience and remediation.