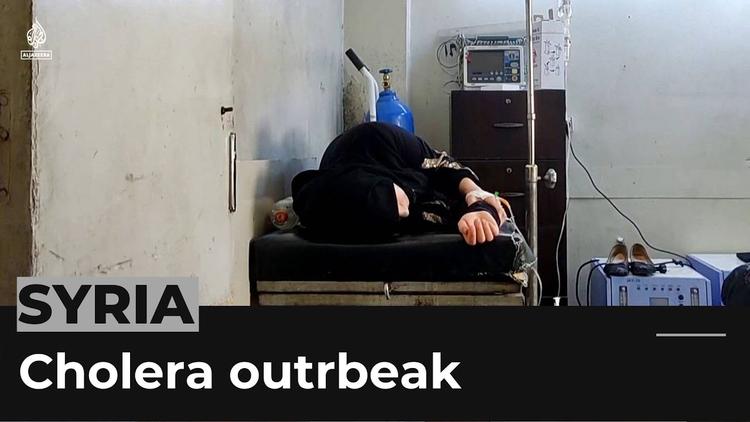 Human Rights Watch – (Beirut) – Turkish authorities are exacerbating an acute water crisis that is believed to have given rise to the deadly cholera outbreak spreading across Syria and into nearby countries, Human Rights Watch said today. All parties to the conflict need to ensure the right to clean water and health for everyone in Syria.

The Turkish authorities have failed to ensure an adequate water flow downstream into the Syrian-held portion of the Euphrates river and a consistent water supply from Allouk water station, a critical source of water located in an area of northern Syria under their control, to areas held by Kurdish-led forces in northeast Syria. Discriminatory diversion of aid and essential services by the Syrian government as well as ongoing security and access constraints across all of Syria inhibit an adequate humanitarian and emergency response in affected parts of the country.

“This devastating cholera outbreak will not be the last water-borne disease to impact Syrians if the country’s severe water problems are not immediately addressed, particularly in the northeast,” said Adam Coogle, deputy Middle East director at Human Rights Watch. “Turkey can, and should, immediately stop aggravating Syria’s water crisis.”

The Syrian Health Ministry declared a cholera outbreak on September 10, 2022, with the former UN Humanitarian Relief Coordinator Imran Riza calling it a “serious threat to the Syrian people” and to the entire Middle East region. As of November 1, the World Health Organization had recorded 81 deaths from cholera in Syria and more than 24,000 suspected cases. Cholera has since spread to Lebanon, a country enduring multiple crises.

Human Rights Watch spoke to 10 humanitarian workers at 5 international aid organizations working in and on Syria. They highlighted the water crisis, the shortage of medical supplies to the northeast, and the lack of consolidated information from all regions of Syria as major obstacles to an effective response. Researchers also reviewed internal reports by humanitarian organizations on the water crisis from May 2021 onward and on the cholera outbreak more recently.

More than 10 years of conflict have fragmented Syria, decimating its civilian infrastructure and services, including healthcare facilities, water and sanitation systems, and electricity grids. The United Nations estimates that two-thirds of Syria’s water treatment plants, half of its pumping stations, and a third of its water towers have been damaged since 2011. “Cholera does not have to be fatal,” said an aid worker for northeast Syria, stressing that malnutrition rates, the country’s severely damaged healthcare system, and the lack of safe drinking water for many people make the situation so acute.

The dire water crisis afflicting northeast Syria most noticeably since late 2020 has been brought on by several factors including dangerously low levels of water flowing into the Syria-held portion of the Euphrates river from Turkey, on which more than five million people in Syria directly depend for their water supply. This affects water authorities’ ability to serve the communities, and a higher concentration of contaminants in the water can cause disease to spread. According to a June 2021 report by the UN Office for the Coordination of Humanitarian Affairs (OCHA), 54 of 73 water stations along the western bank of the Euphrates were significantly or severely affected by critically low water levels.

A poor rainfall season and disruptions at the Allouk water station, which serves hundreds of thousands of people in the region, have also contributed to the crisis.

The lack of safe drinking water, power generation, and irrigation water for millions of people affect people’s health, livelihoods, food security, and access to electricity. In a September 13 statement, Riza said the source of infection is, “believed to be linked to people drinking unsafe water from the Euphrates river and using contaminated water to irrigate crops.”

The Euphrates river is the most significant source of water and electricity for northeast Syria and other parts of the country. Since February 2021, Turkish authorities have severely restricted the flow of water to the Syrian-held portion of the river, well beneath the 500 cubic meters stipulated by a 1987 agreement between Turkey and Syria. Earlier, in July 2020, a UN OCHA report on Syria referred to a 65 percent reduction in the rate of water flowing into the Syrian-held portion of the river.

In the past year, Turkey has denied responsibility for reduced water levels, noting that it is facing its own water shortages. However, a report by an international nonprofit organization said that between January and May 2021, as water levels were sharply declining in Syria’s reservoirs and nearly causing significant damage to hydroelectric dams, levels at Turkey’s Atatürk Reservoir, one of several operational dams on the Turkish-held portion of the Euphrates, were climbing.

In the past year, both Syria and Iraq, which also depends on the Euphrates river for much of its food, water, and industry, have pressed Turkish authorities to increase the water levels. Iraq, too, is battling a grave water crisis and a cholera outbreak.

While countries have signed bilateral agreements, there is no comprehensive or long-term treaty between Turkey, Syria, and Iraq on water sharing. Syria and Iraq have long accused Turkey of using its hegemony over the river as a political tool, while Turkey has occasionally implied that it is, in effect, a Turkish resource.

Several universal principles govern the use of shared waters. They include the equitable and reasonable sharing of water resources, the obligation not to cause significant harm to co-riparian states, and the general duty to notify and consult with co-riparian states when planning any related economic activity. Turkey’s rejection of the UN Watercourses Convention of 1997 impedes the application of these international principles.

Turkey is an occupying power in parts of northeast Syria. During its 2019 invasion, Turkey and Turkish-backed forces took control of the Allouk water station, near the town of Ras al-Ain (Serekaniye). The water station serves more than 460,000 people in Hasakeh governorate, and the UN describes it as the only viable water source for Hasakeh city and surrounding areas.

Water pumping at the station, first damaged during the 2019 military operation into northern Syria, has been greatly reduced and repeatedly interrupted, forcing people living in Hasakeh to rely on expensive and unreliable private tanker trucks.

Human Rights Watch documented Turkey’s failure to ensure adequate water supplies from the Allouk station to Kurdish-held areas in Northeast Syria in March 2020, in the midst of the COVID-19 pandemic. At the time, 49 Syrian groups condemned what they described as Turkey’s “intentional interruption of water” at the station.

One aid worker said that as Turkey inches closer towards connecting areas in northern Syria that it occupies to its own electricity grid, it may no longer face meaningful pressure to continue supplying water from the Allouk station to Hasakeh.

The station continues to experience reduced functionality and frequent disruptions, partly also because of badly needed repairs and inconsistent access for repair teams, three aid workers said. Repairs require approval from all parties involved. On October 25, the UN special envoy to Syria said that the Allouk water station was out of operation from August 11 to October 20.

On October 20, NGO Forums, representing over 150 humanitarian organizations, expressed alarm at the fast-spreading cholera outbreak across Syria and called for, “unfettered access through all means for humanitarian supplies and personnel to respond to the outbreak, and to all humanitarian needs in Syria.”

The longstanding restrictions on aid reaching Kurdish-held areas in northeast Syria imposed by the Syrian government in Damascus have left healthcare facilities and humanitarian groups operating in northeast Syria scrambling to respond to a disease that can spread rapidly in areas with poor water and sanitation infrastructure.

“We have entire families coming in sick, the health facilities are overcrowded, people are lying on the floor,” said one aid worker, and while UN agencies had promised to deliver medical supplies, including antibiotics and intravenous fluids, from Damascus, no supplies had arrived as of October 7, a month after the outbreak was declared. “‘Next week’ they keep saying, ‘next week,’ and we just don’t get it.” The aid worker said UN agencies are apparently facing problems getting Syrian government approval to move the supplies.

“In one instance,” he said, referring to the early days of the Covid-19 pandemic, “the medical supplies promised to us were delayed for a whole year, meaning that when they arrived they were one month away from their expiry dates.”

The Syrian government has long obstructed what is known as cross-line aid, assistance that moves across front lines from government-held parts of the country into non-government-controlled territory.

Turkey should ensure that it equitably shares the Euphrates river’s water resources with Syria and Iraq and that the Allouk water station immediately resumes supplying water to communities in need, Human Rights Watch said. All parties to the conflict should grant aid workers direct and unimpeded access to all areas of Syria.

“Syrians stood up to a brutal government back in 2011 to fight for their civil and political rights,” Coogle said. “Now, more than a decade later, they are struggling to meet their most basic needs.”