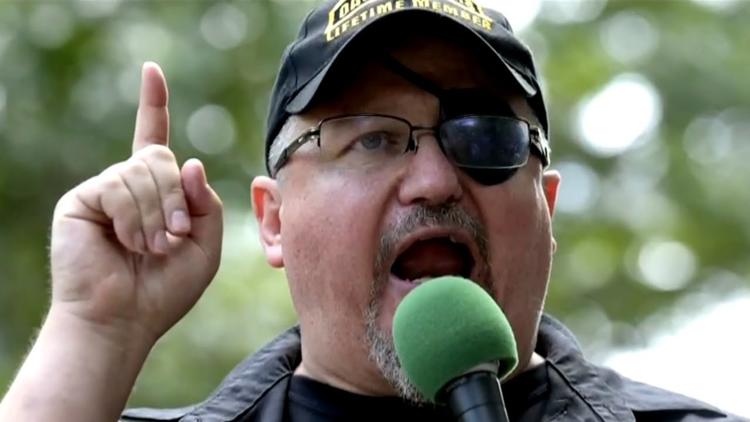 Ann Arbor (Informed Comment) – Ryan Lucas and Carrie Johnson at NPR report that on Tuesday, a jury convicted five leaders of the fascist Oath Keepers militia of “obstructing an official proceeding” by being involved in the invasion of the Capitol on Jan. 6, 2021, in an attempt to keep Congress from certifying the election of Joe Biden as president. In addition, two of the leaders, Elmer “Stewart” Rhodes and Kelly Megs, were convicted of seditious conspiracy. The jury deliberated for three days.

The two are the first individuals to be found guilty of seditious conspiracy since the al-Qaeda operatives who were convicted of the first bombing of the 1993 World Trade Center. Given that the Oath Keepers are just Vanilla al-Qaeda, the parallel is fitting. The other three, Jessica Watkins, Kenneth Harrelson and Thomas Caldwell, had been charged with seditious conspiracy as well, but the jury acquitted them on that weighty charge. The main evidence against the five defendants consisted of their own text messages, which laid out their plans to find a way to obstruct the transfer of power from Donald Trump to President Biden.

After the insurrection failed, Rhodes was secretly recorded saying that the Oath Keepers “should have brought rifles . . . We should have fixed it right then and there. I’d hang (expletive) Pelosi from the lamppost.” The group had stockpiled weapons and ammunition at a motel across the river in Virginia with a “Quick Reaction Force,” at the ready if Trump called upon them to act. He never made any such explicit statement.

These far right extremists and some 95 others gathered in Washington, D.C. that day at the request of Trump, and they believed, according to Laura Italiano at Business Insider, that he would deputize and “federalize” them to stop Biden’s certification. They believed that the president had the authority to call forth a militia according to the 1792 Insurrection Act. Constitutional scholars disagree.

The Oath Keeper leaders did not just make up this expectation of being deputized. Trump had told the Proud Boys, another far right militia, “stand back and stand by,” giving these self-appointed paramilitaries the impression that he was willing to put them to use when the time was right. Otherwise, why should they “stand by?”

The conviction of Rhodes and Kelly is a great but minor triumph for democracy. What would be a major such triumph?

The conviction of Donald Trump on these same charges. This is the Trump who addressed the crowd in Washington on Jan. 6 and said, “We fight like hell. And if you don’t fight like hell, you’re not going to have a country anymore,”

Tom Dreisbach at NPR observed that Trump had ignited the fire on December 19 with a tweet, “Statistically impossible to have lost the 2020 Election. . . . Big protest in D.C. on January 6th . . . Be there, will be wild!” Kelly Megs, the just-convicted seditious conspirator, reacted gleefully,

The Oath Keepers are dangerous extremists and gun nuts, but they don’t give evidence of wanting to act autonomously. They yearned for a leader, for a president who would give them marching orders and deputize their militia for the, as they saw it, protection of America.

If they are guilty of seditious conspiracy, Trump is more so, and justice won’t be done until he is in the slammer for it.

I wrote when Rhodes and his stooges were first indicted of the Oath Keepers and all the ways it resembled al-Qaeda:

The group was founded in 2009 in the wake of Barack Obama’s election to the presidency and comprises far right-wing conspiracy theorists. It is led by the terrifyingly looney Elmer “Stewart” Rhodes. The Southern Poverty Law Center writes, “In 2014, Rhodes claimed the group had an unlikely 35,000 dues-paying members who are said to be mostly, although not exclusively, current and former military, law enforcement and emergency first responders.” Some Oath Keepers hold, or are running for, elective office.

Leader Rhodes said things after Biden’s win like “This is a military invasion by the cartels and a political coup by the domestic Marxist controlled left, which sees open borders and mass-illegal invasion as their ticket to permanent illegitimate political power . . .”

The DOJ Indictment alleged that

“Rhodes and certain co-conspirators, to include selected regional leaders, planned to stop the lawful transfer of presidential power by January 20, 2021, which included multiple ways to deploy force. They coordinated travel across the country to enter Washington, D.C., equipped themselves with a variety of weapons, donned combat and tactical gear, and were prepared to answer Rhodes’s call to take up arms at Rhodes’s direction. Som co-conspirators also amassed firearms on the outskirts of Washington, D.C., distributed them among “quick reaction force (“QRF”) teams, and planned to use firerms in support of their plot to stop the lawful transfer of presidential power.”

… The DOJ complaint says that the insurrectionists invaded the outer part of the Capitol at 2 pm on Jan. 6, and that “at that time, Rhodes entered the restricted area of the Capitol grounds and directed his followers to meet him at the Capitol.”

Then Oath Keeper fascist brown shirts marched up the east steps of the Capitol in “stack” formation. Stack One joined an angry mob, some of whom assaulted police officers shouting “take their shields” and “Our house!” At 2:38, the indictment says, the doors were breached and Stack One advanced into the Capitol with the crowd. Stack One then split up, one group heading for the Senate Chamber, where they ran up against stiff resistance from the Capitol police. Unable to break into the Senate, they regrouped and left the building. The other half of Stack One attempted to find Speaker Nancy Pelosi in the House of Representatives, but failed to do so and left.