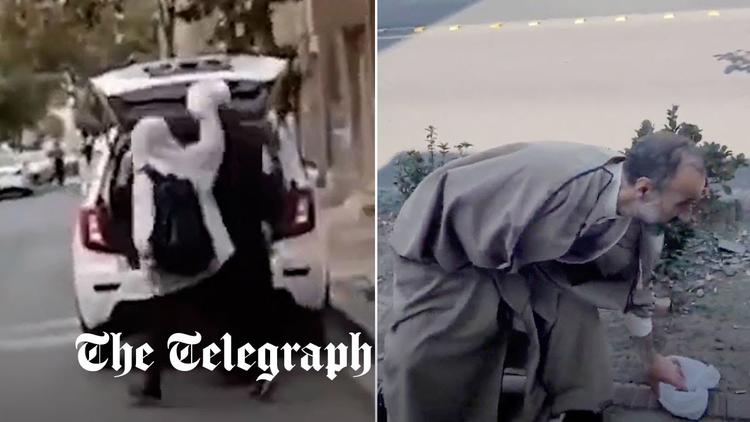 By Golnaz Esfandiari and Hamid Fatemi | –

( RFE/RL ) – Nationwide antiestablishment protests have raged across the Islamic republic since the death of Mahsa Amini, a 22-year-old woman who died on September 16 shortly after she was arrested for allegedly violating the hijab law on women’s dress.

As the authorities have waged a deadly crackdown on the rallies, some demonstrators have turned to new tactics to sustain the monthslong protests, including tipping off Islamic clerics’ turbans in the streets.

Many Iranians associate members of the clergy with Iran’s Islamist regime, which many blame for the repression and corruption in the country.

While some Iranians have praised the “turban throwing” as an act of resistance, others have expressed concern that low-level clerics who are not affiliated with the state could become the victims of harassment and violence.

State media reported the arrests of two people in recent days who were accused of knocking off clerics’ turbans.

Article continues after bonus IC video
The Telegraph: “Iranians knock turbans off clerics’ heads in a show of contempt amid hijab protests”

London-based human rights lawyer Shadi Sadr said the tactic was a “brave and revolutionary act.” Sadr, the co-founder of the rights group Justice for Iran, told RFE/RL that protesters were “humiliating” clerics without resorting to violence. “They’re [targeting] the clergy’s turban as a symbol of the crimes and corruption of the past 43 years as well as the privileges clerics have enjoyed,” she said.

“There is no violence in it, and it also includes youthful mischief, which highlights the spirit of the revolution,” Sadr added, referring to the monthslong protests that have posed the biggest threat to the establishment in years.

But Ahmad Zeidabadi, a Tehran-based journalist and former political prisoner, said that some of the clerics targeted in the streets “may be critics or even victims of [state] policies.”

“This phenomenon…mainly targets clerics who do not hold any government positions,” he said on Twitter, adding that senior clerics in powerful positions rarely appear in public and are often protected by security guards if they do.

Reformist cleric Hojatoleslam Ahmad Heidari, who was jailed in the past for his support for the opposition Green Movement, warned that the new trend could taint the “beautiful face of [the] protest movement against oppression and injustice.”

“You’re right to be angry at those wearing turbans,” Heidari wrote on the news site Esafnews.com. But he added that “those who have a hand in power and are your target” are out of reach. He said many of the clerics targeted were “young and elderly” clerics who are not sitting in “ivory towers.”

Attacks on clerics, particularly those who attempt to enforce Islamic codes in public, had been on rise in Iran even before the protests erupted, forcing many clerics to appear in public without their robes and turbans.

Last week, a cleric was reportedly hospitalized after being wounded in Karaj, near Tehran, amid antiestablishment protests in the city. The hard-line Fars news agency claimed that protesters attacked the cleric with knives.

Hassan Fereshtian, a Paris-based Iranian cleric and researcher, said the turban-throwing trend was the result of the “suppressed anger of the past four decades.”

Fereshtian, a student of the late dissident Grand Ayatollah Hossein-Ali Montazeri, expressed hope that Iran will reach a point “where secular people can live peacefully next to the clergy and unveiled women next to those who choose to wear the hijab.”

In the past year, regime supporters have knocked off the turbans of clerics who had criticized the establishment, including former Interior Minister Abdollah Nuri and former parliament speaker Mehdi Karrubi, who has been under house arrest since 2011 for disputing the 2009 reelection of former President Mahmud Ahmadinejad.