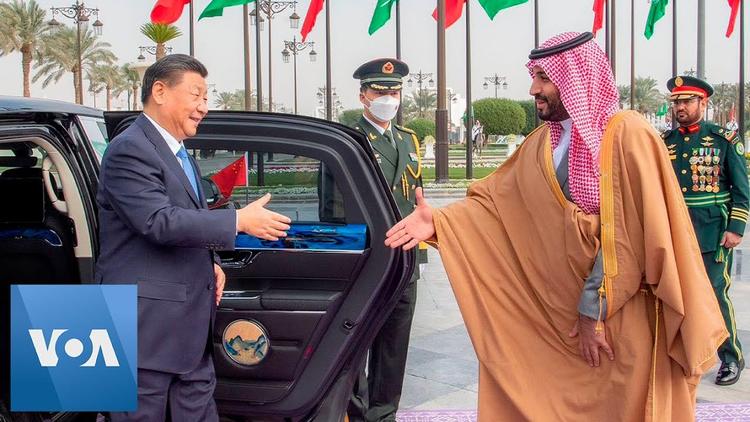 ( Middle East Monitor ) – On 14 February, 1945, while US President Franklin D Roosevelt was returning from the Yalta Conference where he met Britain’s Winston Churchill and Joseph Stalin of the USSR, King Abdulaziz Al-Saud, the founder of the Kingdom of Saudi Arabia, was summoned to meet him privately. The meeting took place on USS Quincy in the Suez Canal, The Quincy Pact was signed by the two leaders as a result of the meeting. The most important part of the agreement was that the US would provide unconditional protection to the ruling Al-Saud family in return for Saudi Arabia’s guarantee of energy supplies to the US for a period of 60 years. During the presidency of George W Bush in 2005, the agreement was renewed for another 60 years.

Throughout this long period, things were going well and relations between the two countries were good until Mohammed Bin Salman Al-Saud became Crown Prince of Saudi Arabia in 2017, and then Joe Biden entered the White House as President of the US in January 2021 and completely ignored the de facto Saudi leader. Throughout his election campaign, Biden vowed to punish Bin Salman, who was accused by the CIA of being involved directly in the 2018 murder of Washington Post journalist Jamal Khashoggi in the Saudi Consulate in Istanbul.

That is why Biden deliberately chose not to contact the prince after his election as US president, and insisted on speaking to King Salman on condition that his son did not listen in or join the discussion. Biden also removed the Houthis in Yemen from the list of terrorist groups, which angered Bin Salman, who responded by getting closer to Russia and China. The Saudi leader then refused to increase oil production when asked by the US to do so, and act as an alternative supplier to Russian oil and gas following Moscow’s invasion of Ukraine.

Some global media outlets reported that Bin Salman refused to take a call from Biden arranged by the White House. According to the Wall Street Journal, Bin Salman shouted at US national security advisor Jake Sullivan during a meeting when Khashoggi’s name was mentioned. The prince pointed out that he did not want to discuss the issue again, and said that the US could forget its request to double oil production.

The crown prince’s position pushed Biden to visit the region, and led him to back down from his position towards Bin Salman and his vow to make the Kingdom a “pariah” state. The visit was a strategic shift which saw the US take an interest in the Middle East once more after it had turned its back on Washington and looked to the Far East. This was among the geo-strategic repercussions of the Russian-Ukrainian war and threats to security and energy in Europe.

“We will not walk away and leave a vacuum to be filled by China, Russia or Iran,” explained Biden during his visit to Jeddah. It is as if the fate of the Middle East and its people is only determined by competition between the major powers.

Bin Salman was apparently cold during Biden’s visit, leaving the US president disappointed. He was surprised by Saudi Arabia agreeing with Russia within OPEC+ on a significant reduction in oil production quotas rather than an increase in order to control prices. This looked strongly as if it was timed to coincide with the midterm Congressional elections in the US. It was a personal blow directed at Biden by the Saudi leader.

Another challenge for Biden was the visit of Chinese President Xi Jinping to Riyadh at the invitation of the Saudi crown prince. Bin Salman was also appointed as prime minister instead of his father. The Chinese president’s reception was much more lavish than that afforded to his US counterpart. The handshake between Bin Salman and Xi lasted at least ten seconds, as commentators were quick to point out. Biden had had to make do with a quick fist bump.

The strategic partnership agreement signed by Saudi Arabia and China angered the US. The White House said that Xi’s visit to Riyadh was part of China’s attempts to extend its influence around the world. While Washington stated that the visit was not a surprise, the reaction to it was evident in the prediction that it will cause a problem in the relationship between America and China and other allies, including Saudi Arabia.

Questions are now being asked about Bin Salman’s adoption of that partnership agreement with China. Will it, for example, cancel his grandfather’s agreement with the then US President Roosevelt, the Quincy Pact? Or will he play Washington and Beijing off against each other, with the risk that both will eventually cast him out? Even though political pressure in the US has ensured that Bin Salman as Saudi prime minister will be immune from prosecution over the Khashoggi murder, the coming days will show us whether this signals another strategic shift by the Biden administration, and whether the crown prince is able to manoeuvre himself enough to get through this great challenge in one piece.