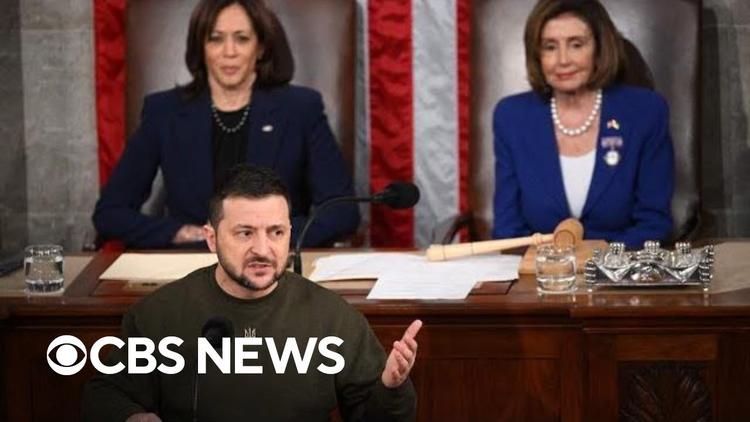 Ann Arbor (Informed Comment) – Ukrainian President Volodomyr Zelensky’s impassioned speech for US help in his war to defend his country from Russia was historic. After talking about the ability of Ukraine to withstand Moscow’s onslaught, He said, “Americans gained this victory, and that’s why you have succeeded in uniting the global community to protect freedom and international law. Europeans gained this victory,”

In framing the struggle as one to safeguard liberty and “international law,” President Zelensky appealed to settled norms, and this is correct.

Human Rights Watch reviewed the international law of occupation and armed conflict, and it notes that stunts like Putin’s annexation of provinces of East Ukraine are irrelevant to the law:

“Irrespective of any self-proclaimed label, under international law, including the Geneva Conventions, Russian troops in Ukraine are an occupying force. The situation in eastern Ukraine… would fall within the meaning of occupation in the Fourth Geneva Convention of 1949 . . .”

One of the primary considerations in the law of military occupations is the need to distinguish between combatants and non-combatants:

Mr. Zelensky referred to the Russian failure to make this distinction, with its attacks on civilian targets:

“If your Patriots stop the Russian terror against our cities, it will let Ukrainian patriots work to the full to defend our freedom. When Russia — when Russia cannot reach our cities by its artillery, it tries to destroy them with missile attacks. More than that, Russia found an ally in this — in this genocidal policy: Iran. Iranian deadly drones sent to Russia in hundreds — in hundreds became a threat to our critical infrastructure. That is how one terrorist has found the other.”

What is wrong with indiscriminate Russian artillery, missile and drone strikes on Ukrainian cities is precisely that it makes no distinction between military targets and noncombatants. HRW points out, “Direct attacks against civilian objects—such as homes, apartments and businesses, places of worship, hospitals, schools, and cultural monuments—- are prohibited unless they are being used for military purposes and thus become military objectives… The laws of war also prohibit indiscriminate attacks. Indiscriminate attacks are those that strike military objectives and civilians or civilian objects without distinction.”

International law seldom has much teeth, and only has a few tribunals where it can be adjudicated. It is often aspirational. Mr. Zelensky joined in the aspiration, however. He said, “The restoration of international legal order is our joint task. We need peace, yes. Ukraine has already offered proposals, which I just discussed with President Biden, our peace formula.”

But if those are the grounds of the struggle, they have to be universal. Otherwise, the campaign is not based on principle but mere Great Power rivalry. In that case there would be no moral difference between Russia and the United States on Ukraine– it would just be a bone that two big dogs are fighting over.

In 1967, Israeli generals, having worked for over a decade toward this goal, occupied the Syrian Golan Heights. Israel and Syria were at war, so the initial Israel occupation was not illegal. But the international law concerning occupation envisions it as only lasting for the duration of the conflict. By virtue of having continued for 55 years, the Israeli occupation has become illegal. The occupying power is forbidden to bring its own citizens into the occupied territory and settle them on it, as Israel has done with the Golan. It is forbidden to alter the life ways of the local inhabitants, which Israel has done. Above all, it is forbidden to annex the occupied territory to itself permanently, which the Israeli Knesset or parliament has done.

Israel has no legitimate claim to the Golan Heights. No international body ever granted Syrian territory to Israel. Syria owned the Golan Heights when it was recognized in 1945 as one of the original members of the United Nations, and Israel sat in the UN with Syria, thereby recognizing it within its borders. The United Nations charter forbids the acquisition of territory by one state from another through warfare.

The final arbiter of international affairs is the UN Security Council, which passed Resolution 497 on this issue:

The Security Council, Having considered the letter of 14 December 1981 from the Permanent Representative of the Syrian Arab Republic contained in document SI 14 791 .

” Reaffirming that the acquisition of territory by force is inadmissible, in accordance with the Charter of the United Nations, the principles of international law and relevant Security Council resolutions, I. Decides that the Israeli decision to impose its laws, jurisdiction and administration in the occupied Syrian Golan Heights is null and void and without international legal effect; 2. Demands that Israel, the occupying Power, should rescind forthwith its decision; 3. Determines that all the provisions of the Geneva Convention relative to the Protection of Civilian Persons in Time of War, of 12 August 1949,” continue to apply to the Syrian territory occupied by Israel since June 1967.”

The annexation of parts of Ukraine by Russia’s Vladimir Putin that Mr. Zelensky and the Biden administration decried is no different from the Israeli annexation of the Golan Heights.

Yet the United States did not in 1981 invite Hafez al-Assad, the then president of Syria, to address Congress. Not only has the U.S. done nothing practical to get Israel out of Syria, it has actually condoned Israeli actions there. The Syrian government of Bashar al-Assad may be odious, but governments come and go, and all Syrian governments insist on the integrity of the country. International law doesn’t stop applying just because an s.o.b. comes to power in a place where it is violated.

The same things could be said for the Israeli occupation of the Palestinian West Bank and of the Gaza Strip.

What is the reason for which the U.S. acts in this lawless way in the Middle East? Is it about whiteness? Are Ukrainians more deserving of the application of international law because they are white, while the Syrians are coded as “brown?” Is it about Christian nationalism, so that Muslims are excluded? But surely it is Putin who is invoking Christian nationalism? And by the way, Syrians were recognized as “white” in US immigration law, so even racism wouldn’t justify the double standard.

Virtually no country in Africa, Asia or the Middle East has rallied to Biden’s cause of defending Ukraine. The lack of enthusiasm has many roots, but one of them is a strong sense that the U.S. is not principled on this issue and is merely pursuing a narrow national interest. They do not see Washington as actually upholding a rules-based international order. And they are correct in this assessment.