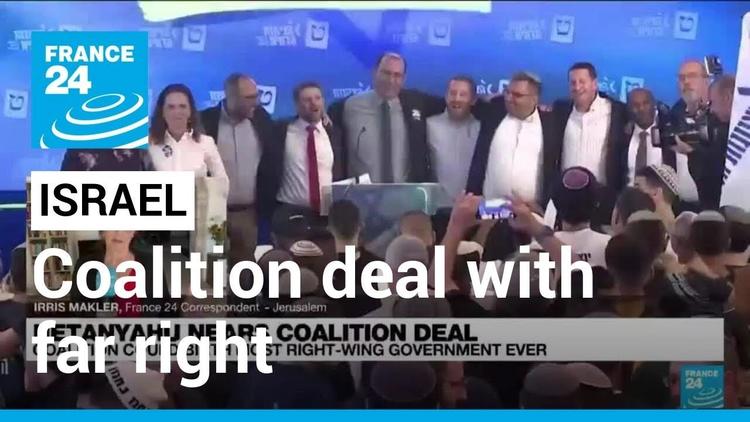 The agreement specifies that the Religious Zionism bloc head Bezalel Smotrich would be a minister in the Ministry of Security, responsible for the Coordinator of Government Activities in the Territories (COGAT), which had until now reported to the Israeli military. Smotrich has said he wants to make Israel a theocratic state, and he or members of his party advocate expulsion of “disloyal” Palestinians and easing the rules of engagement for Israeli army troops so that they can simply shoot down defiant Palestinians throwing stones.

This step will imperil the relationship of the Netanyahu government with the international community, especially the United States and the European Union, as the Israeli press admitted.

The US and the EU have extensive contacts with COGAT, especially in Area C, which Israel rules directly. COGAT sets rules for and oversees Palestinians in the West Bank, but also provides administrative support to Israeli squatters on Palestinian land. Somtrich’s Religious Zionism bloc openly despises Palestinians and champions the squatter movement of Israelis who encroach on Palestinian property, encouraging them to expand their squatter-settlements and to steal more Palestinian land.

Smotrich will appoint the new Security Ministry minister in charge of COGAT, and so his party official will now be the point person for the US and the EU in their quest to improve the welfare of the Palestinians, which is guaranteed to lead to explosive tensions.

Smotrich’s appointee can be depended on to increase the number of Israeli squatters while strangling planning and construction in Palestinian townships in Area C. He will likely also order the demolition of many Palestinian homes and buildings in Area C on the grounds that they were not properly permitted through the Israeli administration, and will likely refuse to grant Palestinians new building permits. He will also likely begin the process of annexing Israeli squatter settlements to Israel proper.

One Israeli general called these administrative changes “the most dramatic change in the West Bank since 1967.”