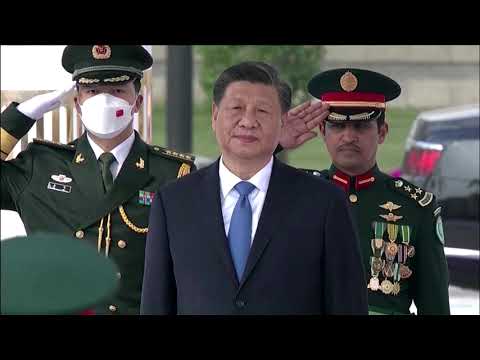 Ann Arbor (Informed Comment) – Al Jazeera reports that Saudi King Salman Bin Abdulaziz on Thursday signed an agreement with visiting Chinese Premier Xi Jinping at the Yamama Palace regarding a “comprehensive strategic partnership” between the two countries. Xi announced that his visit to the kingdom would inaugurate a “new era” in the relationship of China to the Arab world, the countries of the Gulf, and Saudi Arabia itself.

The Chinese press in Arabic said that the goal of the premier’s visit was to find ways of cooperating in the face of a global economic slowdown, an increase in bloc politics, widening wealth gaps, as well as escalating food and security crises.

According to BBC Monitoring, King Salman and Xi Jinping signed six major agreements fostering greater cooperation. One concerned an attempt to harmonize China’s Belt and Road Initiative and Saudi Arabia’s Vision 2030, an attempt to diversify the economy away from an over-dependence on petroleum exports.

Mohammed Bin Salman is well aware that the days of petroleum are numbered, and his Vision 2030 is intended to set Saudi Arabia on a sound post-oil footing by diversifying the economy and using the country’s sovereign wealth fund and vast currency reserves to fund this transition. Chinese investment and trade are viewed as important to the transition. For China to incorporate Saudi Arabia into its One Belt, One Road global transportation and trade infrastructure plan would help in this shift. Moreover, the Gulf Arabic press stressed, the GCC countries feel that in the past they have put too many of their eggs in the American basket, and they want to avoid depending so deeply on one superpower in the future.

Al Jazeera says that earlier on Thursday, Xi was welcomed by Saudi Crown Prince Mohammed Bin Salman, just before the convening of a summit between the two countries.

Xi Jinping will meet not only Saudi authorities but also those of the six-nation Gulf Cooperation Council (GCC) and thirty 30 heads of state or of international organizations. The Chinese delegation is expected to sign commercial and other agreements worth $30 billion.

Xi will meet on Friday with the GCC leaders (comprising Bahrain, Kuwait, Oman, Qatar,Saudi Arabia and the United Arab Emirates).

Xi said that he would work with the Gulf Cooperation Council to build a new, multi-dimensional relationship regarding energy and in the field of diplomatic partnerships.

For their part, Saudi authorities pledged to create a new regional center in Saudi Arabia for Chinese factories.

The Saudi and Gulf dedication to diversifying their economies, given the short timeline for the end of petroleum as a transportation fuel, has caused them to expand relations with China. This move has provoked fears in the United States concerning a growing partnership between Saudi Arabia and China in sensitive infrastructure in the Gulf.

BBC Monitoring reports that green hydrogen, the teaching of Chinese in Saudi Arabia, and incentives for mutual direct investment formed components of the deal.