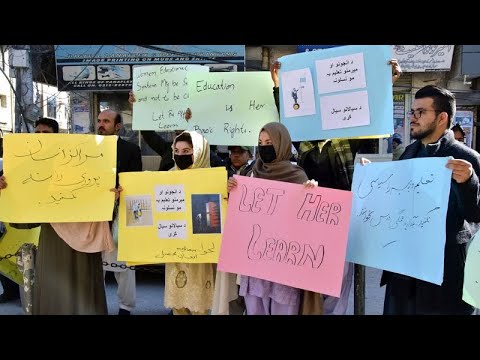 I’m Mustafa Sarwar, a senior news editor at RFE/RL’s Radio Azadi. Here’s what I’ve been tracking and what I’m keeping an eye on in the days ahead.

(RFE/RL ) – The Taliban banned women from attending universities in Afghanistan on December 20. In a statement, the Taliban’s Higher Education Ministry said the decision was effective immediately, and ordered educational institutions to inform the ministry of their compliance. The ministry did not give any reasons for its decision.

The move was quickly condemned by countries and rights groups around the world. In Afghanistan, female university students wept and consoled each other after hearing the news. Students in Nangahar University in eastern Afghanistan staged a protest on December 21 and male students walked out of their exams in solidarity with their female classmates. On December 22, around 50 women staged a rally in Kabul that was violently broken up by Taliban fighters.

Why It’s Important: The Taliban’s university ban is the latest restriction against women in Afghanistan. Since the Taliban seized power last year, the militant group has severely curtailed female education and women’s right to work. The militants have also imposed restrictions on women’s appearances and freedom of movement.

The university ban is a major blow to women. But it was also expected. Nida Mohammad Nadim, a hard-line cleric who was appointed as the Taliban’s minister for higher education in October, has said that female education is “un-Islamic and against Afghan values.”

The Taliban’s latest ban has also provided further evidence that the group is bent on reestablishing its brutal regime from the 1990s, when women were barred from working outside their homes and girls were banned from attending school.

What’s Next: When it seized power, the Taliban pledged to uphold women’s rights. The militant group projected a more moderate image to convince the world that it had changed. But the Taliban has failed to meet its promises and reimposed many of its repressive policies of the past. Observers have said the militants are likely to further restrict the rights of women.