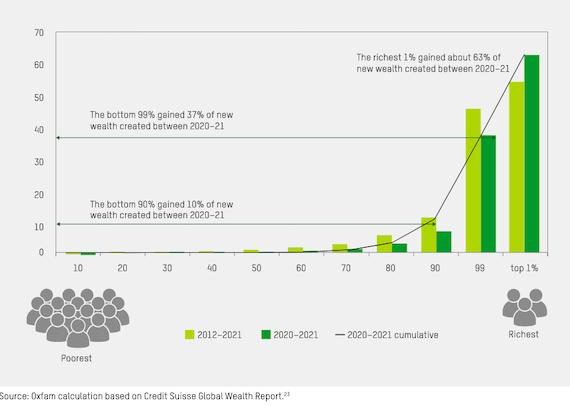 Ann Arbor (Informed Comment) – Oxfam , the British charity, has released a new report finding that the global problem of wealth inequality is growing ever more threatening. Of all the new wealth the entire human race has produced in the past two years, the richest 1% gobbled up 66% of it. The less-rich 99% of us only got a third of it.

So Neoliberal economists will say, so what? Everybody gets richer with unfettered market capitalism. Why should we care if some people get really richer? Is it just envy?

See, the problem is that not everybody got richer. Some 1.7 billion workers, about half of the 3.32 billion people employed worldwide, saw their real incomes slip as inflation raced ahead of their wages. Some of the families of the workers at the bottom of the pile went to bed hungry in 2022 — 800 million of them.

Oxfam doesn’t say so, but the problem with this concentration of wealth in a few hands, those of the world’s 2,668 billionaires, is that they are not only hogging resources but they are way too powerful. It is from among this group that propaganda originates against our taking firm and swift steps to halt carbon dioxide emissions. They just want their piles of gold to grow, like Smaug the dragon in Tolkien. They don’t seem to care that their grandchildren will drown, or burn up in wildfires, or drop dead from heat exhaustion. Maybe they think their family wealth will protect them. But billionaires can die in sudden fires like anyone else.

Billionaires also distort democracy in menacing ways. They attempt to gut workers’ unions, as with Jeff Bezos at Amazon. In the absence of strong unions, workers’ real income declines over time, forcing some into poverty. The billionaires corrupt the courts. They engage in legislative capture, buying the very politicians who regulate their industries. They also form a powerful standing lobby for bad tax policy, i.e. tax breaks for the rich and the starvation of government in provision of services. Donald Trump should not have been allowed to use his personal fortune to buy the presidency. People like Trump are proof positive that making a lot of money is no guarantee of soundness of mind.

Oxfam’s conclusions are as follows:

“Since 2020, the richest 1% have captured almost two-thirds of all new wealth – nearly twice as much
money as the bottom 99% of the world’s population.
• Billionaire fortunes are increasing by $2.7bn a day, even as inflation outpaces the wages of at least
1.7 billion workers, more than the population of India.
• Food and energy companies more than doubled their profits in 2022, paying out $257bn to wealthy
shareholders, while over 800 million people went to bed hungry.
• Only 4 cents in every dollar of tax revenue comes from wealth taxes, and half the world’s billionaires
live in countries with no inheritance tax on money they give to their children.
• A tax of up to 5% on the world’s multi-millionaires and billionaires could raise $1.7 trillion a year,
enough to lift 2 billion people out of poverty, and fund a global plan to end hunger.”

The billionaires got rich off of the COVID-19 pandemic, indirectly. Wealthy countries such as the U.S., faced a deflationary situation brought on by the shut-down of businesses and the reluctance of many in the public to go out for shopping, dining and entertainment. They responded correctly, by pumping government stimulus monies into the economy. The extra money supply, however, drove up asset values, held disproportionately by the rich, who scooped up literally trillions of dollars in profits. Since in most wealthy countries you only pay taxes on securities when you sell them, this vast new amalgamation of filthy lucre remained beyond the grasp of the tax official.

In 2022, even as the pandemic was lightening, 95 food and energy corporations doubled their profits, Oxfam says.

Even more horrible, during the COVID crisis, the progress the nations of the world had made since 1990 in lifting people out of extreme poverty was reversed, with 500 million persons falling back into it The proportion of the world living in extreme poverty in 2000 was 14.3%. The amazing programs coordinated by the UN were able to reduce that percentage to 7.1% in 2019. There is no prospect of most of those in extreme poverty getting out of it in this decade.

All tax policy is a redistribution scheme. Low taxes on the rich result in gobs of money being thrown at them, and in a reduction of state support for education, infrastructure, and other key services that allow people at the bottom to be upwardly mobile.

It is like the government is a person with a snowblower cleaning their driveway. If the person consistently aims the snowblower at a particular spot, that spot will end up with a big mound of snow, and the rest of the area around the driveway will be flat. The snowblower’s direction is tax policy.

Oxfam suggests a sensible solution to these problems. Tax the rich more, and the super-rich most.

The U.S. in the 1950s was a Republican paradise, with strong economic growth in the corporate sector. The highest tax rate then was 90%, and taxes were progressive. We don’t need a radical solution. We just need Republican President Ike Eisenhower’s tax policies back.

Oxfam points out that Costa Rica has already raised taxes on the wealthy by 5%, and some other countries are also rethinking their tax policy. In the wealthy countries, however, I fear that the marriage of the billionaires and the corrupt politicians is so immutable that the political will simply doesn’t exist to implement such steps.

Sooner or later, a billionaire (or trillionaire) is going to decide to dispense with the politicians and just take over, as Bonaparte defenestrated the members of the French parliament before summarily making himself emperor. We’ve already seen strong moves in that direction in the U.S. and Brazil.