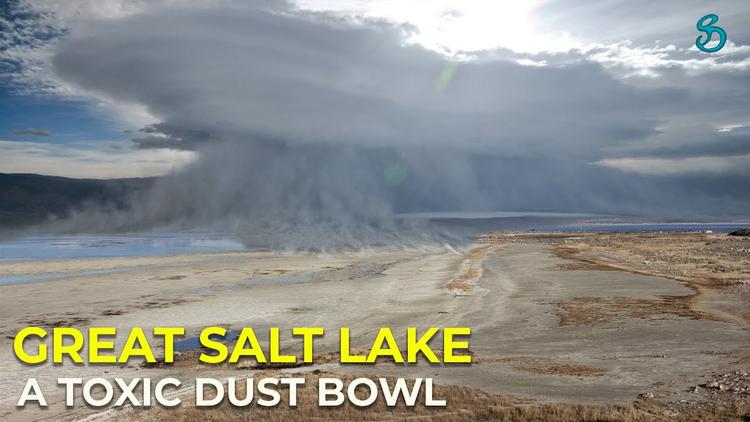 Ann Arbor (Informed Comment) – Excessive water use is draining the Great Salt Lake so quickly that at this rate, it could be gone in as little as five years. So argue Benjamin W. Abbott and Bonnie K. Baxter, et al. in a new scientific paper.

The Great Salt Lake is already not what it was. The lake is 19 feet below its average height. It has lost 73% of its water and its surface area has shrunk by 60%. One of the favors this body of water does its surroundings is to suppress the toxic dust that would fly around in a dry basin of this sort.

The authors point out that the lake provides “habitat for more than 10 million migratory birds and wildlife throughout the Wasatch Front. Almost 350 bird species depend on Great Salt Lake habitats.”

This role of wetlands such as those around the lake has become even more crucial as others have dried up. The U.S. West is suffering from two decades of mega-drought that has been made substantially longer and more intense by the climate crisis.

Human over-use of the waters of the lake is the main cause of its desiccation, but that over-use is driven in part by the increased heat and aridity of the region.

The paper argues that the lake provides at least $2.5 billion a year to the Utah economy. The moisture it puts into the air falls as snow, increasing the snow pack for skiing by some 20%. Salt and minerals are extracted from it, as well as brine shrimp.

Because the lake has less water in it, the level of its saltiness has increased by nearly a fifth, which could start killing off the brine shrimp, which are used as fish food and are a major economic product of the region.

At the same time, a dry lake bed of this sort contains toxins, including loads of arsenic, that winds will blow around in the area, making for a major health concern.

When Owens Lake in California dried up after Los Angeles diverted its water there, local residents were exposed to high amounts of fine particulate matter, which causes asthma and lung problems.

A similar fate may await the residents of Salt Lake City.