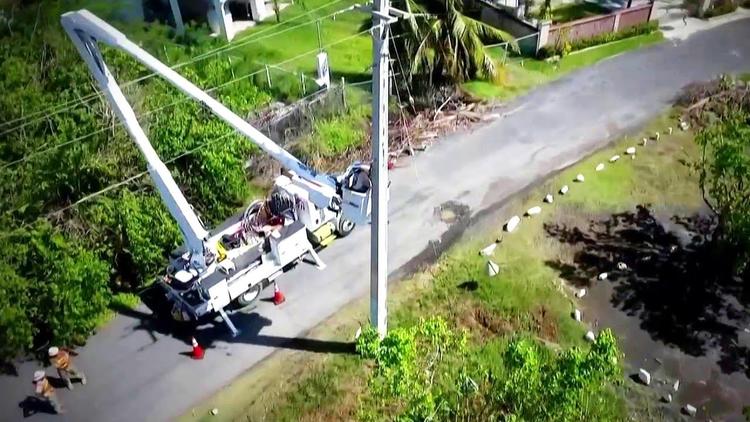 As a Caribbean island, Puerto Rico has suffered massive damage in this century from hurricanes, which are becoming more intense and more destructive as the oceans heat up. Perhaps the worst was Hurricane Maria in 2017. That is, hurricanes have been a fact of life in that region for a very long time, but they are getting stronger. The jury is still out about whether global heating will make them more frequent. That it is making them more devastating, however, is not in question.

Hurricanes are fed by warm water beneath them, and the warmer the water, the heavier the winds. Also, warm water causes water vapor to accumulate in the air above it, so that when hurricanes arise they dump heavier rain on land. Fiercer winds and more flooding are a recipe for disaster on an island.

Alas, the situation is going to get worse, possibly much worse. Some climate scientists have become dissatisfied with the current Saffir-Simpson Hurricane Wind Scale, which only goes up to a “5,” whereas they feel that Maria was a category 6. We could see 7, too, unfortunately.

Puerto Rico is a neglected territory of the United States. The people are U.S. citizens. The dollar is the legal currency. They vote in presidential elections, though they have no congressional representatives or senators. It is an in-between place, neither state nor colony. Because the currency is the strong U.S. dollar and because the island is bound by federal law, the Puerto Rican government cannot offer companies sweetheart deals to move there very easily, in contrast to, say, the Dominican Republic. The population is rapidly declining and is already down to 3.2 million (at most; some estimates are lower) off of a high of 3.8 million twenty years ago.

The Jones Act requires that anything Puerto Rico imports from a US port be carried on a ship built and flagged in the US, which raises the costs of some of the island’s imports and even prevents it from receiving some goods at some times without a special waiver. After Maria a diesel ship not flying the stars and stripes that had loaded up at a US port was not allowed to offload at Puerto Rico.

The electricity grid in Puerto Rico is among the worst in the United States, being old and ramshackle and apparently kept together with chewing gum and masking tape.

Take what I have to say about this with a grain of salt, since I’m no engineer. But in my view this custom of having power lines above the ground is just going to have to end in the face of the looming mega-storms we are summoning by burning gasoline, coal and fossil gas.

After Maria, Jonathan Gatehouse at the CBC explains, the government brought in LUMA Energy, half-owned by a Canadian company, to run Puerto Rico’s grid and attempt to update its electrical system. The 15-year contract is worth $2 billion. Call me a pessimist, but it seems obvious to me that some megastorm in the not too distant future is going to knock down all those electricity poles they are erecting or restoring. As it is, Gatehouse reports that Puerto Ricans aren’t exactly impressed with LUMA’s progress in getting and keeping the lights back on.

That is why the FEMA/DOJ study is so important. It finds that Puerto Rico gets a lot of sunlight for solar panel electricity generation. In fact, “Renewable energy potential in Puerto Rico significantly exceeds total energy demand now and through 2050,” it says.

Scientists are discovering that solar farms and agriculture complement one another, so the study recommends “agrovoltaics,” which can up the amount of renewable energy while not interfering with getting the crops in. Likewise, it recomments community solar. That is defined by the USG as “any solar project or purchasing program, within a geographic area, in which the benefits of a solar project flow to multiple customers such as individuals, businesses, nonprofits, and other groups.”

Gatehouse describes how some Puerto Rican businesses are already moving to community solar.

But the big takeaway from my point of view in the study is this: “Smaller renewable resources spread across the power system could recover faster from disruptive events than the current system, which consists of fewer and larger power plants.”

Bingo! Solar plus battery systems that can make people relatively independent of the grid are the way to go. The evidence so far, by the way, is that rooftop solar panels can survive hurricanes if the house on which they are installed does.

So here’s the problem. Puerto Ricans are by mainland standards poor, with a median household income of $21,967 per year. Rooftop solar costs at least $10,000 on the island. So few can afford to go in that direction, even with the $7500 tax credit. The Powerwall or other battery would be another $11.500.

So maybe some restaurateurs or factory or workshop owners could benefit, but not most people.

You kind of wish the government had given out the $2 billion to people to get solar panels and batteries with rather than to a company that would try to fix up the old-style centralized power plants and their above-ground electrical lines.

But maybe when the final report comes out, and if the Democrats win big in 2024, some resources can finally be directed at Puerto Rico that would actually improve the situation, and people’s lives.