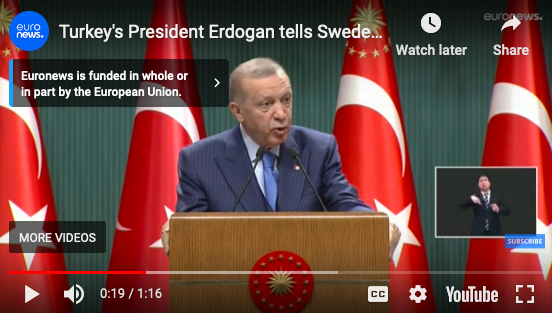 Erdogan is demanding that Sweden cooperate with Turkey in repressing Kurdish activist expatriates in Sweden, all of whom he views as terrorists. He also says he is furious about the stunt pulled by Danish-Swedish Islamophobe Rasmus Palodan of burning the holy Qur’an near the Turkish embassy. Paludan is the leader of the far right “Hard-Line Party” (Stram Kurs). No subtleties for these fascists, I guess.

US State Department spokesman Ned Price condemned the Qur’an burning, but told Reuters, “We have a saying in this country – something can be lawful but awful. I think in this case, what we’ve seen in the context of Sweden falls into that category.”

A Turkish mob gathered in front of the Swedish consulate in Istanbul to burn the Swedish flag. Muslims don’t typically take revenge on the Bible for desecration of their holy book, since they believe in the biblical prophets along with John the Baptist and Jesus.

Although Erdogan is posturing and pretending he does not know that a democracy like Sweden cannot just round up people because they are of Kurdish extraction and that the government cannot prevent people from doing horrible things like burning the Qur’an, he talks as though Sweden could have intervened on these matters if the government wanted to. He has therefore set the tone on Turkish social media, of contempt for the current Swedish politicians, though BBC Monitoring points out that a Google Trends search does not indicate that the controversy between Erdogan and Swedish Prime Minister Ulf Kristersson is provoking much public interest.

Sweden and Finland applied to join NATO in the wake of the Russian invasion of Ukraine, abandoning their long traditions of neutrality. Since admission to the organization requires the assent of all NATO members, and since Turkey joined NATO in 1952, Erdogan immediately began attempting to use Turkey’s vote as a bargaining chip. He sought to make the two countries back down from their generally sympathetic stance toward Syrian Kurds, the territory of which Erdogan invaded with Trump’s blessing. The two had also given political asylum to Kurdish activists who had escaped Turkey.

Kurdish-speakers exist in Turkey, Syria, Iraq, Iran and the Caucasus. The four countries where they are resident fear Kurdish nationalism and separatism and have repressed nationalist Kurds. Only Iraq has granted the Kurds a special status, of a Kurdistan Regional Government, within the Iraqi state, though in 2017 Kurds were prevented from seceding by the Iraqi army. There are three dialects of Kurdish, however, and Kurds are not automaticaly a nation because of their language. Turkish political scientists argue that the large Kurdish population of Turkey largely votes the same way their Turkish neighbors do, and separatism is probably a minority sentiment. After all, Turkey is a relatively prosperous country and a member of the G-20, whereas a Kurdistan in southeast Anatolia would be a poor, agricultural, backward country with few resources. Ankara is, however, as nervous as a long-tailed cat in a room full of rocking chairs about any hint of Kurdish identity.

In December, Sweden extradited a convicted member of the PKK (Kurdistan Workers Party), which some Kurds support, back to Turkey, where he had been handed a six-year sentence in absentia. Both the US and Turkey list the PKK as a terrorist organization.

In part, Erdogan is grandstanding in hopes of forcing on Sweden and Finland more such cooperation on security matters related to Kurdish movements.

In addition, Paul Levin, head of Stockholm University’s Institute for Turkish Studies, argued to AFP that Erdogan is grandstanding on the burning-the-Qur’an-issue to whip his followers into a frenzy that will aid him in the upcoming May 14 elections.

Turkey’s economic news is not good, and Erdogan’s Justice and Development Party (AKP) is polling worse than it has in the twenty years it has been in power. A foreign policy crisis involving an insult to one key element of Turkish identity is therefore an ideal platform for the combative president, who has championed more freedoms for Muslims while rejecting Iran-style Muslim fundamentalism and hewing to Turkey’s secular constitution.

If Levin is correct in this analysis, it seems to me that deploying a Qur’an-burning as a vehicle to get reelected is nearly as problematic as the Qur’an-burning itself.

Erdogan is also irritable about insults to himself in the Swedish newspapers.

Levin suggests that pro-PKK Kurdish exiles in Sweden, knowing of Erdogan’s short fuse and amour propre, have deliberately provoked insults toward him in the press and on social media in order to forestall Swedish accession to NATO, since that might mean that Sweden would have to agree with Ankara to round them up and hand them over to Turkey, or at least to expel them from Sweden.

The Biden administration seems confident that Erdogan will eventually acquiesce in Swedish and Finnish membership in NATO, because the country wants to buy billions of dollars worth of high-tech F-16 fighter planes and the US may stall that deal until Ankara plays ball on NATO expansion.