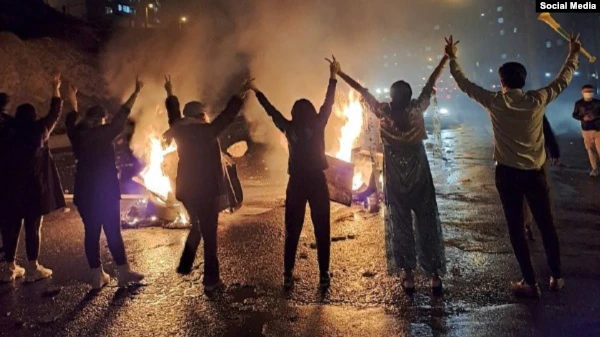 ( RFE/RL) – Antiestablishment protests have raged across Iran for months, despite a brutal state crackdown in which hundreds of demonstrators have been killed and thousands more detained.

Triggered by the death of a young woman died after she was arrested by Iran’s morality police in mid-September, the ongoing nationwide protests have become the longest-running public rebuke of the clerical regime since the Islamic Revolution in 1979.

While the number of protests has dropped in recent weeks, anger over decades of state repression and economic mismanagement is unlikely to dissipate, analysts say, predicting that the protest movement is likely to endure as the gulf widens between the ruling clerics and Iran’s young population.

Ali Fathollah-Nejad, an Iran expert with the American University of Beirut, says the country appears to be engulfed in “a revolutionary process” that started with protests in 2017-18 over economic grievances that quickly turned political.

Young Iranians protest against the government in the western city of Sanandaj on November 16.Via social media.

“Any such process inherently involves phases of both relative calm and unrest,” Fathollah-Nejad, who authored a study on the 2017-2018 protests for the Brookings Doha Center, told RFE/RL. “Crucially, the present revolutionary episode suggests an unbridgeable gulf between the state and society.”

‘We Are Not Afraid Anymore’

During the current protests, Iranians have demanded an end to the Islamic republic and targeted their anger at the most visible symbols of the clerical regime, including the mandatory head scarf for women and Supreme Leader Ayatollah Ali Khamenei.

As the authorities have increasingly used lethal force to crush the protests, Iranians have continued to express their dissent at scattered street gatherings and memorials for the victims of the crackdown. Others have sprayed slogans and hung protest signs in the streets while some have chanted anti-regime slogans from their rooftops and windows at night.

Iranian security forces have killed at least 476 protesters, including over 60 children, since the rallies erupted, according to rights groups. Over 15,000 people have been detained. Two young men have been publicly executed for their involvement in the protests.

“Nothing will be the same, we have found our voice,” a female protester in Tehran, who spoke on condition of anonymity for fear of retribution, told RFE/RL. “Even if this revolution does not achieve its goal in the near future, we are not afraid anymore, we know how to fight and resist.”

A journalist in the Iranian capital says the protests pose a significant threat to the establishment, although he argues that the regime is not in imminent danger of collapsing. There have been no visible cracks within the ruling elite and armed forces, while the protests have yet to bring the economy to a complete halt.

“The more the [political hard-liners] have tightened the Islamic republic in the past 25 years, the more society has resorted to protests.”

“They’ll do all they can to stay in power, so for now I expect more tensions and growing discontent particularly due to the situation with the Internet and [the national currency],” he said, referring to increased online censorship and the plummeting value of the rial against the U.S. dollar.

“It’s clear that many Iranians, given their ongoing dissent, believe this popular uprising could succeed in unseating the Islamic republic,” he added. “It’s also important that Islamic republic officials come to believe that they’re on a losing team. We haven’t reached either of these tipping points yet.”

Prominent Tehran-based sociologist Hamid Reza Jalaipour says the gap between the establishment and the rest of the population is “significant.” But he suggests that the majority of Iranians are still unwilling to participate in protests designed to overthrow the regime.

“Currently, 15 percent of society are supporters of the establishment and 15 percent are serious protesters,” Jalaipour said in comments published by Iranian media in October. “Seventy percent of the population is silent.”

He said the establishment’s failure to listen to people’s demands over the years has contributed to the current wave of protests.

“The establishment did not learn lessons from [past protests],” he said. “The more the [political hard-liners] have tightened the Islamic republic in the past 25 years, the more society has resorted to protests.”