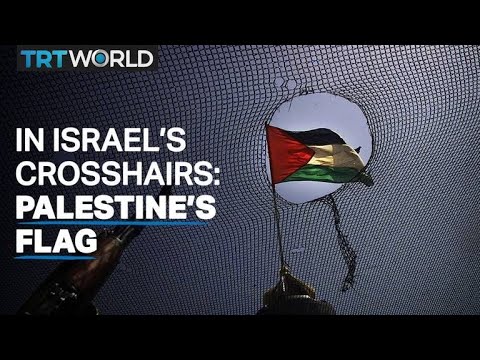 ( Middle East Monitor ) – Tying in to Israeli Prime Minister Benjamin Netanyahu’s statement that “the Jewish people have an exclusive and unquestionable right to all areas of the land of Israel” is the recent order by Israel’s Security Minister Itamar Ben Gvir to remove Palestinian flags that are publicly displayed. At face value, the directive was prompted by displays of Palestinian flags during recent protests against Netanyahu’s government, as well as the recent release of Palestinian prisoner Karim Younis from Hadarim prison after serving 40 years, and his waving of a Palestinian flag upon arriving at his village of Ara. According to Aljazeera, Younis’s family were instructed by Israel not to celebrate his release from jail.

“It cannot be that lawbreakers wave terrorist flags, incite and encourage terrorism, so I ordered the removal of flags supporting terrorism from the public space and to stop the incitement against Israel,” Ben-Gvir declared.

Yet the speed at which Netanyahu is stifling any form of Palestinian political expression point towards maintaining Israel’s colonial expansion and Palestinian erasure.

Equating Palestinian legitimate anti-colonial resistance with terrorism enabled Israel to build its false security narrative. Colonial opposition to the Palestinian flag dates back to the aftermath of the 1967 war when Israel established its military occupation over all of Palestine. With annexation plans back to the helm, silencing Palestinians is becoming Israel’s new normalised form of violence which the international community will not object to. Removing Palestinian flags is far from a global concern and the action will not raise any urgency, not even for perfunctory statements. The latter, after all, have already been saved for the more visible international law violations, including settlement expansion, forced displacement, and the killing of Palestinian civilians. If diplomats worldwide have failed to act on what the International Criminal Court has clearly deemed to be war crimes, how will a flag resonate enough to catch attention internationally?

For Palestinians, however, Ben Gvir’s directive has grave implications. Not so long ago, during the funeral of Palestinian-American journalist Shireen Abu Akleh, Israeli police officers disrupted the funeral violently and arrested mourners for displaying the Palestinian flag. In 2017, Israeli snipers killed Palestinian activist and double amputee Ibrahim Abu Thurayya during the Great March of Return demonstrations, who was known for displaying Palestinian flags during protests. Similarly, to Abu Akleh, Israel was able to construct impunity for Abu Thurayya’s killing, claiming that it was impossible to determine his cause of death.

Behind the Palestinian flag displays, there are Palestinians whose voices are being silenced through various repressive means and, at times, murder. What the flag stands for; that is, the perseverance of Palestinians despite the looming annexation, is what Ben Gvir seeks to currently eliminate. Yet the current focus on the Palestinian flag by the Israeli government should not be dissociated from the ultimate plans to colonise all of Palestine. And this is precisely why the international community, if it was truly in favour of Palestinians’ political rights, should go beyond Ben Gvir’s explanation and treat the latest repressive action against Palestinians in terms of colonial violence.