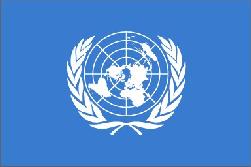 Bringing the United Nations Back In

There will be anti-War protests in the coming month, as the 3-year anniversary of the Anglo-American invasion of Iraq approaches.

I think it is time to demand a timetable for US withdrawal from Iraq. I suspect a majority of Iraqi parliamentarians want that. The Sunni Arabs demand it. The Sadrists demand it. It is time. Saying that the guerrillas would take advantage of a timetable, given the carnage we saw on Monday (see below) is frankly silly. They are taking advantage of the current situation. We have to create a new situation, with which they might be happier so that they stop blowing things up. Staying this course is untenable.

But that step will not necessarily resolve the crisis.

I think the peace movement has a real opportunity here to make a push for much heavier United Nations involvement in Iraq. I say, let’s make up placards calling on Kofi Annan to get involved, and calling on Bush to let the UN come in in a big way, with proper protection.

Here are the advantages:

1. The United Nations has political legitimacy in the Middle East. American unilateralism does not. The guerrillas would be humiliated to deal with Bush, who crushed them and marginalized them. They would be more likely to treat with the UN.

2. Grand Ayatollah Ali Sistani has demanded greater UN involvement, and he has enormous authority with the Shiite majority.

3. No country is going to send troops to Iraq under a United States military command. There has to be a United Nations peace-enforcing command. Once that exists, it might become an umbrella for Arab League troops, e.g. Cheney was told as much when he was in Cairo, according to the Arabic press.

I.e., by keeping out the UN, the Bush administration is guaranteeing that it is mainly American (and British) blood and treasure that is spilt in Iraq for years to come.

4. If the United Nations could be mobilized to help Iraq through the coming years of instability and help shepherd it to independence from the US and UK, it would help to strengthen international, multilateral organizations generally and contribute to an institutionalization of international law.

5. The permanent members of the UN Security Council, as well as all UN member states, have a keen interest in the fate of Iraq and the Gulf. They should be encouraged to deploy some of their treasure (and probably some blood) for the common benefit of Iraqis and the world.

6. The peace movement will be more credible if it has a program other than simple US withdrawal from Iraq. The US public is aware that an Iraq in flames at the head of the oil-rich Gulf could have a horrible impact on the US itself. A demand that the Iraq situation be internationalized is a responsible way of getting the US out, getting Iraq out of Bush’s incompetent hands, and helping Iraqis move forward.

7. Bush invaded Iraq in part in order to destroy the United Nations. Forcing him to bring it in to Iraq would be a blow against American unilateralism and rightwing American aggression for decades to come.