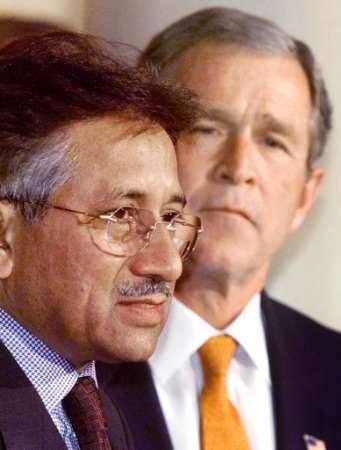 How much of the $10 billion in aid Bush and Cheney gave to Pakistani dictator Pervez Musharraf after September 11 ended up being used to kill US, NATO and Afghan troops in Afghanistan?

NYT reports that US intelligence intercepted communications between elements of the Inter-Services Intelligence, Pakistan’s military intelligence division, indicating that they gave support to the Haqqani group of Pushtun guerrillas in bombing the Indian embassy in Kabul.

There have long been suspicions that the Pakistani military was using Pushtun guerrillas to project power into Afghanistan, even as they fought them inside Pakistan itself. The NYT was told by US government officials that this intercept was the first smoking gun proving that active-duty ISI officers were complicit with violence in Afghanistan (and therefore with attacks on US and NATO troops.)

The Pakistani military has tight command and control. ISI’s collaboration with the neo-Taliban and other guerrilla groups could not occur without the knowledge and acquiescence of Pakistani president Pervez Musharraf, who was chief of staff until last fall. That is, Cheney, Bush and McCain have backed to the hilt a military dictator who has continued the old 1980s and 1990s policy of supporting Pushtun guerrillas as a way of a) dominating Afghanistan and b) training other guerrillas to hit Kashmir.

Here is what McCain said about Musharraf last winter:

‘ “I continue to believe Musharraf has done a pretty good job, done a lot of the things that we wanted him to do . . . I would remind some of my fellow Americans that Benazir Bhutto and [former prime minister Nawaz] Sharif presided over failed states, there was corruption, there was a failed state in Pakistan when Musharraf took charge…I would like to give Musharraf some credit for taking the measures that we asked him to do.” ‘

Musharraf’s ‘successful state’ involved dismissing the Supreme Court, provoking massive and repeated demonstrations, violating the constitution, interfering with free and fair elections, and presiding over a virtual national meltdown on the assassination of Benazir Bhutto late last December. McCain appears to value nothing beyond sheer military might– even if it has shady contacts to al-Qaeda!

Pakistani PM Yousef Raza Gilani is in denial about the ISI/ Taliban links, or perhaps he doesn’t want to provoke an immediate crisis with the Pakistani military, which has been known to make coups. His Pakistan People’s Party has been reluctant to see Musharraf impeached, since de facto party leader Asaf Ali Zardari (Benazir’s widower) has behaved corruptly in the past and could be at risk for some of the same charges levelled at Musharraf.

You think you’re angry? Talk to someone from Delhi about all this right about now.