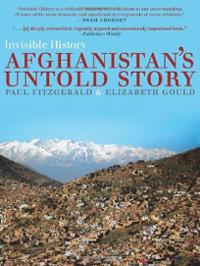 Paul Fitzgerald and Elizabeth Gould write in a guest op-ed for IC:

“Rebuilding Afghanistan is the most cynically pro-American thing you could do anywhere in the world in terms of making it a strong ally in the best sense of the word. Not a puppet or a right-wing military dictatorship but a really good Islamic country that has the potential to be democratic and progressive and lead this whole part of the world.” – Rob Schultheis, an American journalist in Kabul, 2002.

As the Obama administration unveils its new and expanded war plan for Afghanistan and Pakistan, word comes that it has downgraded the so called democracy-building efforts of the Bush administration, that it will negotiate with the so called “moderate” elements of the extremist Taliban and that it may take a more direct role in running the government of Afghanistan.

President Obama’s special representative for Afghanistan and Pakistan, Richard Holbrooke denies that the U.S. seeks to sideline Afghanistan’s elected president, Hamid Karzai. But the handwriting is on the wall. After floundering around for 7 years, the U.S. and the west appear to be falling back on a failed Clinton-era plan to embrace the Taliban’s legitimacy. But if fixing Afghanistan – a country so recently believed to be open to a western democratic embrace – has proven too taxing for the west’s leadership – what can the Obama administration do to right the situation before the same old misinformed policy habits issue in a new wave of Islamic extremism?

The first major mistake, according to one well placed Afghan/American was Washington’s total deference to American companies whose control of the reconstruction process assured that the financial benefits accrued exclusively to foreign developers, contractors, and suppliers while leaving the local population and their leadership out of the development loop.

Over the last 7 years much of the aid that reached Afghanistan never got to the local level where it mattered and where it did, it was snatched up by warlords, put in power by Bush administration overseers. As free market ideologues, the Bush administration allowed international contractors free reign over reconstruction and did virtually nothing to coordinate western aid or distribute it fairly throughout Afghanistan. Instead, the virtuous cycle that reconstruction could have generated for the rural population with jobs and revenue quickly turned vicious, alienated the population, spurred corruption and undermined the new government’s legitimacy.

Aside from squandering its military advantage by turning away from Afghanistan to Iraq, the situation was turned from bad to worse when the Bush administration insisted on putting the “hated” warlords back into the new centralized government to compensate for its under-manned mission.

Now the Obama administration seeks to redress Bush era mistakes. But while Washington might dream that returning to a pre-9/11 strategy of splitting its “moderate” Taliban enemy from its “hard-core ideological” Taliban enemy might turn the tide, the chilling impact of a Taliban return will shut down any further local cooperation with the west.

Appearing on the scene as if by miracle in 1992, the Taliban’s purported mission of clearing the countryside of warlords and drug dealers was received warmly by Washington’s K street lobbyists. Painted by Pakistan’s Inter Services Intelligence Directorate (ISI) as an indigenous Afghan tribal force, the Taliban were actually a thinly disguised ISI strike-force paid for by a consortium of business interests.

The CIA’s former chief of the Near-East South-Asia Division in the Directorate of Operations, Charles Cogan today refers to them as “a wholly owned subsidiary of the ISI.” But former ISI Director General Hamid Gul claims his ISI also received help from Britain’s former High Commissioner to Pakistan, Sir Nicholas Barrington who “inducted both former royalists and erstwhile communists into the Taliban movement.”

For 8 years, the Clinton administration bought the idea of a “moderate” Taliban. But the very idea was a chimera, played skillfully by the ISI in a double game that saw Washington unwittingly support ISI’s interests while undermining its own.

Today, the Obama administration resumes where the Clinton administration left off, but if it really wants a fair and lasting solution for Afghanistan, it must begin by helping the Afghan people fulfill their democratic and progressive potential, and in doing so, it will help them lead this whole part of the Islamic world.

Paul Fitzgerald and Elizabeth Gould are authors of