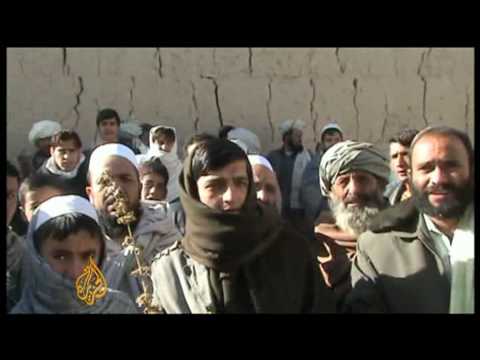 Afghan insurgents greeted the inauguration of Hamid Karzai as president for another 5 years with a string of attacks and bombings that left 23 dead and dozens wounded on Friday.

A motorcycle-driving suicide bomber in the southwestern province of Farah struck near a truck depot, killing 15 and wounding 38, according to AFP.

In Kabul, the capital, a roadside bomb targeted the convoy of Abdul Rabb Rasul Sayyaf, killing 5 of his bodyguards. Sayyaf, a warlord member of parliament had fought the Soviets in the 1980s and espouses a hard line Muslim ideology. In the 1980s and the 1990s he was close to some al-Qaeda leaders, but threw in with the pro-American government that emerged after the overthrow by the Bush administration of the Taliban. He is an ally of the Karzai government and campaigned for Karzai in the recent election. Although American observers make a strong distinction between the Taliban and the pro-Karzai warlords in Afghanistan, they are often are not very far apart with regard to ideology. What seems important to Washington is whether they are pro-Karzai right right now or not.

In Khost, a roadside bomb killed 3 civilians when it ripped through their automobile.

Meanwhile, UNICEF draws attention to the wretched living conditions of Afghans, calling it the world’s worst place for a child to be born. The Guardian writes, “Afghanistan has the highest infant mortality rate in the world – 257 deaths per 1,000 live births, while 70 percent of the population lacks access to clean water.” More statistics are given here. The life expectancy in Afghanistan at birth is 44. The adult literacy rate is 28%, which I suspect means that the female adult literacy rate is on the order of 6%.

Where is NATO going to get 400,000 well trained police and troops in a country with a 28% literacy rate? At the moment, 10% of the Afghanistan National Army is said to be literate, suggesting that they are being largely recruited from the ranks of the rural poor, since that is only a little over 1/3 the national rate. Another problem with the ANA is that it is 40% Tajik, when Tajiks are likely 22# of the population, and has no recruits from Helmand and Qandahar provinces, the centers of Pashtun resistance to the Karzai government and foreign forces.

USA Today undermines the entire master narrative of US/NATO military operations in Afghanistan, writing: “The U.S. military says the vast majority of the 700 detainees at its biggest prison in Afghanistan could eventually be released because they’re fighting more for money than ideology.”

War hawks are always saying we are there to fight the Taliban because they are ideologically aligned with and inseparable from al-Qaeda. But the guys we’ve been fighting and imprisoning seem just to be poor schmucks looking to make a buck by militia activity.

Aljazeera English reports that a US raid on a village in Afghanistan on Friday morning is alleged by local Afghans to have gone badly wrong, leaving innocent civilians dead. The village, Haidarabad, is in Ghazni province. I could not find any other report on this incident aside from that of Aljazeera.