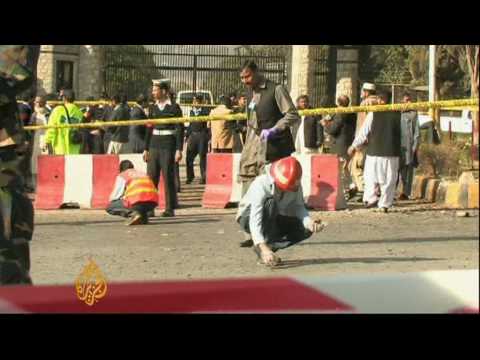 Radio Azadi reports in Dari Persian that the government of President Hamid Karzai has greeted the Obama plan for that country “warmly”. Kabul interprets the plan as a pledge to build up the Afghan military and then turn over security duties to it, a sequence that many Afghans find appealing.

As expected, the Taliban rejected the plan as a form of imperialism. They dismissed Hamid Karzai as a Western puppet. But they also pledged that their organization has no international dimensions and they do not seek to commit terrorism in the West. The Taliban are pulling away from the wounded al-Qaeda.

Indians are miffed that their country was not mentioned in the speech. But the Indian government expressed satisfaction with the plan. Minister of State for External Affairs Shashi Tharur said that India was “very pleased that pressure on the Al-Qaeda and the Taliban in Afghanistan and on the Pakistan-Afghanistan border will not be eased.”

Russia was “largely positive” regarding the new American policy. Russia is afraid of Afghanistan’s heroin production, which is addicting Russian youths and, VP Putin holds, interfering with them having children, adding to the Russian population decline. Russia is also afraid of the spread of Afghan religious radicalism to Russian Muslims (15% of the population).

The Pakistani foreign ministry expressed concern on Thursday morning that if US military forces did not coordinate closely with Pakistan, and if they operated close to the Pakistan border, their operations might well push Taliban and other Pashtun religious militants into Pakistan.

Aljazeera English has a video report on this issue

The last time a foreign military staged a ‘surge,’ i.e. the Soviets in the early 1980s, it produced so much violence that 3 million Afghans were forced to flee to northern Pakistan. Islamabad is wary lest that pattern be repeated.

The split between India and Pakistan here is potentially damaging for the future. Afghanistan is an arena of contention between Islamabad and New Delhi. In the 1980s and 190s, various armed groups were backed by one country or the other. The Taliban were supported by Pakistan, the Northern Alliance by India. If we go back to that kind of proxy war inside Afghanistan, it will be ruinous.