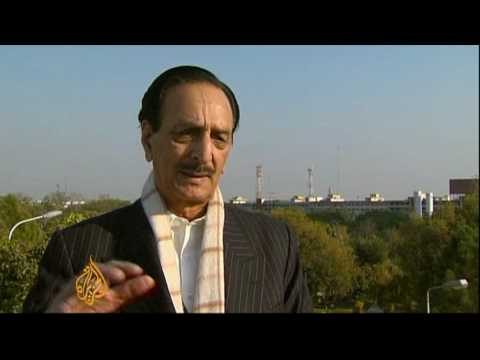 In summer-fall of 2007, the military dictatorship of Gen Pervez Musharraf was coming unravelled in the face of massive street demonstrations demanding the reinstatement of the Supreme Court Chief Justice, Iftikhar Chaudhry, and later the reversal of his wholesale dismissal of the Supreme Court. The Bush administration, especially Dick Cheney, had put all its eggs in the Musharraf basket, giving him $11 bn. in aid despite his reputation as a supporter of the Taliban policy in Afghanistan and his hawkishness toward India. Condi Rice was credited by the NYT with coming up with the idea of bringing back from political exile Benazir Bhutto and her husband Asaf Ali Zardari, leaders of the Pakistan People’s Party, and installing a PPP prime minister under Musharraf, who would become a civilian president. But the old PPP elite had had many corruption charges filed against it, some genuine and some motivated by the political vendettas of Pakistan’s other big party, the Muslim League.

In order for the Rice plan to work, Musharraf had to issue an amnesty for the old political elite that had been in power in the 1990s, before Musharraf’s 1999 military coup. Because Benazir Bhutto was assassinated, her husband, Zardari, ended up as president and became a chief beneficiary of the amnesty. In the 1990s he had become known as Mr. Ten Percent because he allegedly took a cut of contracts with foreign firms.

Musharraf’s National Reconciliation Order was what in the US would be called an ‘executive order,’ a sort of presidential law-making of which the Pakistani Supreme Court is now increasingly critical. And so the Supreme Court struck down the amnesty as unconstitutional.

The reinstatement of the corruption cases in turn caused the Supreme Court to declare over 200 important political figures flight risks and to forbid them to leave the country. One of these was Minister of the Interior Rehman Malik, who was detained. Also Defense minister Ahmad Mukhtar was stopped at Karachi yesterday on his way to Beijing.

The US punditocracy has never understood that the central political narrative of Pakistan in the past 2 and a half years has been the restoration of the rule of law (in the form of the Supreme Court chief justice and then the rest of the SC) and the ending of the Musharraf military dictatorship in favor of a return of the major political parties.

That twin project was riddled with a contradiction, though, since the political parties capable of supplanting the military were themselves often corrupt, while Chief Justice Iftikhar Chaudhry was determined to clean house. So what has happened is that the contradictions have just come to the fore.

How flat-footed the US commentariat is in this regard was obvious in the reaction of CNN’s Wolf Blitzer to Mukhtar’s detention. He asked Pakistani ambassador to the US, Husain Haqqani if it was the sign of a military coup. Haqqani was taken aback, and the Urdu press headlined the interchange.

No, Wolf, it is the opposite. It is an outbreak of the civil rule of law. It was a military dictator who had amnestied Mukhtar and Malik. It is the Supreme Court calling them to account. The US media think the Pakistan Story is ‘violent fundamentalism, military rule, and nuclear threat.’ The reality– that most of the Pakistani public wants a civil rule of law, is almost impossible for Westerners to grasp.

The hysteria in Washington about Pakistani political instability (read: civilian politicians elected to office and an independent judiciary instead of a military dictatorship) will be heightened by this development. And it does potentially weaken president Asaf Ali Zardari, against whom there are outstanding cases. But most judicial authorities hold that Zardari cannot be tried while in office, and there is no obvious way to unseat him, since his party is the largest in parliament.

The rule of law is more important for the structural integrity of Pakistani society and politics than the back door deals of the Musharrafs, Bushes, Rices and Cheneys. Pakistan has a parliamentary system. It will go to new elections in a couple of years. If the government falls before then, it will just have early elections and someone will form a government based on their electoral performance. It might be Nawaz Sharif and the Muslim League. So what? Sharif once agreed with Clinton to send in a Pakistani SWAT team against Bin Laden, and it was Musharraf who nixed that plan. And whereas Zardari has never shown an ability to run anything, Sharif is a steel magnate– though his last term as PM was marked by an overly authoritarian style and a cozying up to Muslim fundamentalists substantially to his right.

And who knows, maybe some of the new non-corrupt PPP voices such as Aitzaz Ahsan will emerge if Zardari falters.

The Pakistani public and elite is turning on the Taliban, including conservative clerics of movements like the Ahl-i Hadis [followers of the sayings of the Prophet Muhammad], are issuing fatwas against Taliban tactics as terrorism. Someone alert Tom Friedman and Faux Cable News. I repeat, conservative Pakistani clerics have just issued a fatwa against Taliban tactics.

Aljazeera English has video on the crisis: