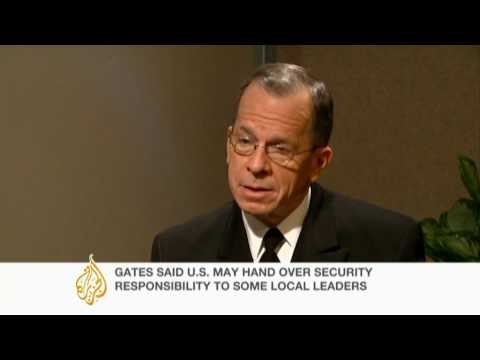 A Taliban guerrilla in Pakistani custody insists that he met Bin Laden in the mountainous province of Ghazni inside Afghanistan.

The allegation is plausible. The US has very good aerial surveillance of the Pakistani Federally Administered Tribal Areas, but has never seen a trace of Bin Laden there. He fought over on the Afghanistan side, and developed sophisticated safe houses during that struggle in the 1980s.

Pakistani sources not only continued to deny that Bin Laden is in their country, but they also expressed reservations about the new Obama Afghanistan policy.

They complain that they were “kept in the dark over the finer parts of the review policy” and say that their assessment of the proposed course of action would depend on those details.

Among Islamabad’s top concerns, according to Sajjad Malik of the Daily Times:

1. It is not clear where exactly the new US troops will be deployed (though it now seems clear that it will be Helmand and Qandahar provinces in the south).

2. Pakistan is “seriously perturbed” by Washington’s allegation that Pakistan is the “epicenter” of terrorism, and by the hint that the US might engage in hot pursuit of Taliban onto Pakistan soil. As a neighbor, Pakistan is concerned at the prospect that NATO will train up a big 150,000-strong Afghanistan Army.

3. The US seems uninterested in achieving reconciliation between Tajiks and Pashtuns, which would have to be part of the solution.

4. The US seems to be overly reliant on the military to impose social peace, which in any case they have not succeeded in doing for the last 8 years.

5. Pakistan is petrified that big US military operations will push a new wave of Pashtuns from Afghanistan into Pakistan, where they would become an element of instability.

6. Obama seems to be deliberately conflating the Taliban with al-Qaeda when in fact the two are distinct.

A Pakistani official told the Daily times, “Our stand is consistent that more troops are not the remedy for the war-torn country, as it will lead to more hatred and create more militants . . . We have been saying that only purposeful dialogue can bring peace and stability in Afghanistan.”

7. They complained that Obama seemed to lump Pakistan with Afghanistan.

Now that it has leaked that the US will also expand its drone strikes into Baluchistan, Pakistan is upset about that step, as well.

Nir Rosen, who knows the situation on the ground in Iraq and Afghanistan intimately, dismisses Gen. Stanley McChrystal’s plans for counter-insurgency in Afghanistan as based on the advice of ‘celebrity pundits’ unfamiliar with ground realities and unduly influenced by their idea of what happened in Iraq.

The thing is, it only matters symbolically. Everything I read in open sources suggests that al-Qaeda has almost no command and control structure left.
Tom Engelhardt decries what he sees as President Obama’s surrender to the US military-industrial establishment on the issue of the Afghanistan surge.