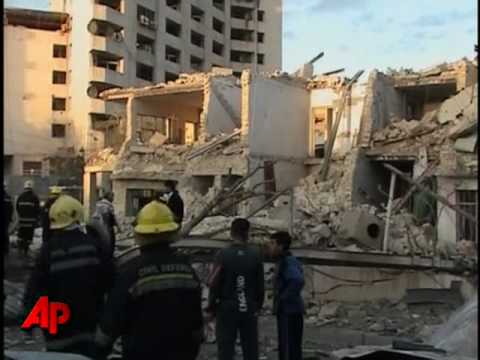 Al-Zaman reports in Arabic on Monday’s string of bombings in Baghdad, in which late reports say 37 persons were killed and more than 100 wounded. The bombings especially targeted the Jadiriya district, where many foreigners, diplomats, and Iraqi policiticians reside. Al-Zaman says that most leaders of the Islamic Supreme Council of Iraq, including Ammar al-Hakim and parliamentarian Humam al-Hamudi, live there and there is a presence as guards of the Badr Corps, the paramilitary of ISCI.

Other bombings sought to damage Al-Zuhur Hotel in a complex of hotel buildings that includes the al-Hamra’ and the Qurtaj.

Al-Hayat says that an Interior Ministry official alleged that all the bombings were suicide bombings. A Baghdad security official was quoted as saying that the suicide bomber who targeted the al-Hamra Hotel was accompanied by a band of armed men who shot it out with the hotel guards before the bomber ran his car into the building and detonated its payload.

Al=Zaman says that three katyusha rockets also targeted the US embassy in the green zone downtown. Parliament abruptly ended its session, with parliamentarians and their guards shouting that the katyushas falling on the green zone could target their session at any moment, and hurrying out of the hall.

In other violence on Monday, 7 were killed in political attacks in Mosul and two policemen were attacked in the northern contested city of Kirkuk.

The bombings are similar to those in August and December, so that it is probably not accurate to tie them to the upcoming parliamentary elections as some observers. including Secretary of State Hillary Clinton, are doing. They are not connected to specific events, but rather the manifestation of a still-powerful Sunni Arab guerrilla insurgency unreconciled to the emergence of a Shiite- and Kurdish-dominated Iraq, and which is determined to destabilize and overthrow this new ruling government.

Sawt al-Iraq transmits analysis from the Kuwaiti al-Qabas that points out that the attacks demonstrate the existence of a sophisticated intelligence and planning cell within the insurgency that is capable of gathering the detailed information necessary for such an attack and coordinating multiple field officers. The piece also laments that Iraqi government security forces seem still to be relatively incompetent at forestalling these periodic big assaults on Baghdad’s landmarks. Those security forces are at the moment a laughingstock because of their preference for phoney ‘bomb-detecting devices’ that are just a scam of some British company, which the UK government has now forbidden to export to Iraq.

Al-Qabas also argues that the attacks on fancy hotels were clearly aimed at hurting foreign investment in Iraq, at discouraging foreigners from visiting the country (and thus isolating it) and in hurting public confidence. The hotels also have the advantage of being relatively soft targets with regard to security, as compared to Iraqi military installations. Since so many journalists stay in those hotels, the attacks were sure to get a lot of publicity and to send the signal that the new Iraq is unstable and perhaps unsustainable.

But if the bombings are not necessarily motivated by upcoming elections, the article says, they are nevertheless likely to have an effect on them. They come after 500 mostly Sunni Arab candidates were disqualified from running in the March 7 parliamentary elections, and at a time when rumors are rife that high-ranking Sunni Arabs will be purged from the military and security agencies.

These steps derive in part from Prime Minister Nuri al-Maliki’s preoccupation with the threat of a Baathist comeback, but the purges he backs risk further alienating ordinary Sunni Arabs who had joined the party for instrumental rather than ideological reasons. The party after all ruled for 35 years, and few Iraqis had nothing at all to do with it.

And the attacks came on the day that the Iraqi government executed Ali Hasan al-Majid al-Tikriti, a cousin of Saddam Hussein, who used poison gas to repress the Kurds in 1988 (killing 5000 at Halabja), and who brutally put down a Shiite rebellion in spring, 1991, after the Gulf War. Aljazeera English has his obituary:

Iraqi Kurdistan erupted with joy at the news of the execution, though some Kurds expressed disappointment that it was not televised. The Iraqi government took pride in the execution having not been marred by the taunting and use of cell phones to record it that marred the execution of Saddam Hussein, and Kurdistan officials concurred. One regret many Kurds had was that the judgment against “Chemical Ali” had condemned him for “crimes against humanity” rather than, as they had wanted, for “genocide.”

The president of the Kurdistan super-province of Iraq, Massoud Barzani, is in Washington for consultations with President Barack Obama, another point of pride for Iraqi Kurds.