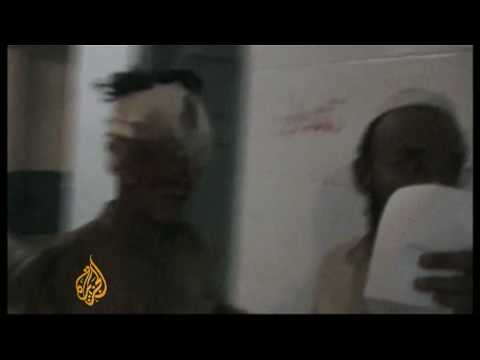 Only a few days after Monday’s horrific bombing of a Shiite procession in Karachi, the Pakistani Taliban struck again, blowing up a truck bomb in the middle of a volleyball match at a Pashtun village bordering South Waziristan. The village is the center of a tribal militia that has fought Taliban forces. The Federally Administered Tribal Area is a headquarters for the Taliban Movement of Pakistan, and a major campaign against the latter has been being waged by the Pakistani army. The bombings are the small terrorist group’s way of inflicting damage on a much stronger Pakistani establishment– and one that is attracting the allegiance of Pashtuns in the struggle against Talibanism.

At the same time, a CIA drone attack killed 6 persons in North Waziristan, the HQ of the Haqqani network of militants who are allied with al-Qaeda and the Taliban.

Unreported in most Western press accounts was that Friday also saw a coordinated series of peace marches in 53 cities of Pakistan by civil society organization protesting both Taliban bombings, especially the attack on Shiites in Karachi on Monday, and the American drone strikes.

A general strike was called by largely Sunni parties in interior Sindh province to protest Monday’s bombing of Shiites. In Karachi itself, Shiites staged marches and rallies.

The violence at the volleyball game and the drone strikes are big stories. But they should not overshadow the peace rallies and the gesture of Sunnis protesting Taliban bombings of Shiites. The Pakistani public is clearly fed up with the Taliban, and is cheering on the army in its struggle against them. If it weren’t for the American drone attacks, in fact, there would not be the slightest ambiguity in the politics of peace and anti-terrorism.

For the hatred for the Taliban in the Swat Valley, which they briefly took over last spring see this Aljazeera English video– note especially the reaction of students and teachers at girls’ schools:

For an end of the year review of the state of political play in Pakistan see Maliha Lodhi. It is a judicious assessment. But I see the big sea change as the turning of the Pakistanis against the Taliban, which they had earlier seemed to think of as anti-imperialist and committed Muslims, even if a bit rigid. Now, I think most Pakistanis see them as thugs and terrorists, a remarkable change. She is right, though, that this change does not alter their suspicion of and fear of the ambitions of the United States in their country and their region.