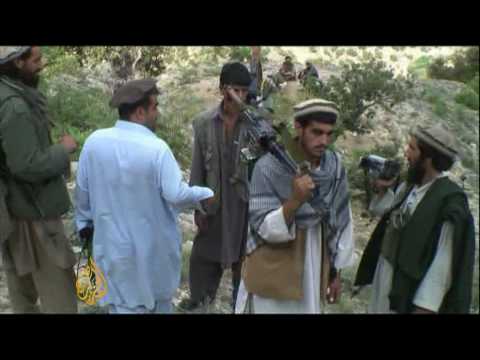 Guerrillas fired mortar shells and used small arms to attack the major US military base in south Afghanistan, Qandahar Airfield, on Saturday. The operation was the third major attack by insurgents during the past week. They had also attacked a NATO convoy in the capital, Kabul, and had attacked Bagram Base north of Kabul. The seven hours long assault on Bagram was a by a platoon-sized unit of some 30 armed men, who managed to kill a contractor and wound 9 US or NATO troops, while 16 of them were killed in heavy fighting. The attacks have pushed the death toll for US troops in Afghanistan past the 1000 mark.

The bold attacks come as President Barack Obama addressed West Point cadets, declaring victory in Iraq and predicting a similar positive outcome in Afghanistan. Obama alleged that the US was withdrawing from a now-democratic Iraq that would not be a platform for attacking the US, implying that Afghanistan would be brought to a similar end-state. But Iraq is highly unstable, has not formed a new government more than two months after the March 7 elections, and cannot exactly be called either democratic or secure and stable. If Iraq is Obama’s measure of success in Afghanistan, he has very low expectations.

At the same time, US and NATO troops began a sweep of a Qandahar neighborhood. The 200 US troops and about 200 – 250 Afghanistan National Army troops conducted door to door searches. The operation is seen as a dry run for a huge push on Qandahar by NATO this summer. This province is, along with Helmand, a major center of poppies-grown for opium and ideologically tends to support or at least think well of the old Taliban of Mulla Omar. Karen DeYoung of WaPo reports on the doubts even in the Pentagon that a ‘clearing campaign’ targeting Taliban in Qandahar can succeed.

Pajhwok writes, “Chairman Muhammad Younus Qanuni said no session of any commission would be held until the ministers were introduced. An MP from the western Badghis province, Azita Rafat, said the delay in introducing the remaining cabinet members had worsened relations between parliament and the government. “The government neither respects the votes of the nation nor us,” she said.”

Speaker Yunus Qanuni is a Tajik former member of the Northern Alliance and is close to Abdullah Abdullah, Karzai’s main rival in last summer’s presidential election. Since Abdullah’s supporters generally believe that Karzai stole the election, it is now difficult for him to achieve better relations with parliament. That any resolution of the crisis in Afghanistan will ultimately have to be political in character is widely recognized. But how to get a political settlement when the executive and the legislature are themselves at daggers drawn is not clear.

Aljazeera English reports on the Taliban and US/NATO campaigns this week in Afghanistan: