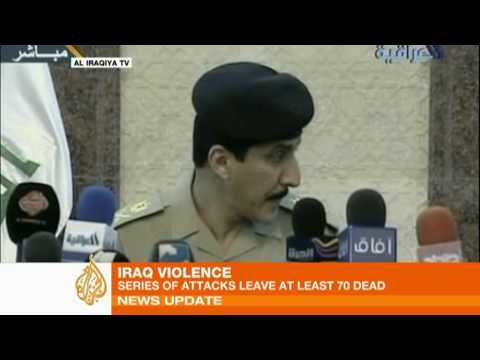 AP is reporting that the wave of bombings and attacks throughout Iraq on Monday is now estimated to have killed 119 persons. Although some analysts are attempting to tie the attacks to the failure of Iraq’s political class to form a government, thus creating a vacuum, I do not see it that way. The attacks do not speak to the weakness of the Iraqi government, but to a) the continued strength of the guerrillas and b) to poor security procedures at the local level. The al-Hayat article cited below quotes an official saying that the security men at the Hilla factory should not have allowed unidentified trucks to park outside it. One take-away is that the US military concentration on killing guerrilla leaders or ‘high value targets’ is not entirely effective. To the extent that the Sunni Arab guerrilla movement is a movement and not just a small organization, it is very difficult to stop it with mere assassinations of individuals.

The biggest casualty tolls came from bombings near a Shiite mosque and in a market in the southern port city of Basra, and at a state-owned textile factory in Shiite-majority Hilla, south of Baghdad. The massive death toll is reminiscent of Iraq’s worst days, in 2006-2007, and proof that the guerrilla cells among dissident Sunni Arabs, whether fundamentalists or secular Arab nationalists, are still highly organized and motivated to undermine the new, Shiite-dominated political order in Iraq.

The bombings had a symbolic side to them. A state-owned textile factory in Hilla generates employment and income for Shiites and ensures their loyalty to the Baghad government. Many of the state-owned economic enterprises in the Sunni Arab areas of Iraq were allowed to collapse by the American government of Iraq, then headed by viceroy Paul Bremer. Sunni Arabs were thrown into unemployment in the tens of thousands, both by American neoliberalism and by the ‘debaathification’ campaign of Ahmad Chalabi and Nuri al-Maliki (now spearheaded by the ‘Justice and Accountability Committee’). In that light, to have al-Maliki heading up a government that provides work at a textile factory for Shiites in Hilla is galling to Sunni Arab militants. Likewise, the Shiite-majority riverside port city of Basra is Iraq’s window on the world, and its Shiite fundamentalist militias have often targeted Sunni institutions and harmed other minorities. Basra province is a major oil-producing and refining center doing bids with foreign oil corporations. Being deep in the Shiite south, it had been considered a difficult target for the Sunni Arab guerrilla cells of the north.

Likewise, a Husayniya or Shiite religious center was bombed in Suwayra near Baghdad, killing 11, and police and army checkpoints throughout Baghdad were attacked with light arms and bombings.

There was also violence in the Sunni north. In Mosul, bombers killed two Peshmerga, members of the Kurdish paramilitary. Arabs and Kurds are competing for influence in Kirkuk, Mosul and Diyala provinces.

These bombings signal that the Sunni Arab cells, full of men with military, munitions and tactical training, are still determined to resist the new, American-imposed order, which is led by the Shiites and the Kurds..

Al-Hayat [Life] reports in Arabic that the attacks were claimed by the Iraqi Hamas, a Sunni fundamentalist organization founded after the US invasion in 2003, which had earlier been aligned with the ‘1920 Revolution Brigades.’ The latter guerrilla group was close ideologically to the Muslim Scholars Association. Iraqi Hamas is now, however, said to have developed its own paramilitary capability.

Aljazeera English has a video report on the violence during the first half of the day on Monday: