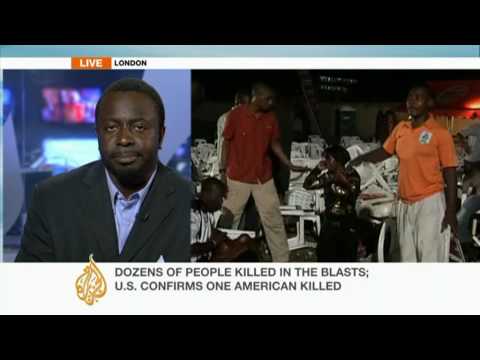 The horrific bombings in Kampala, the capital of Uganda, during public celebrations of the World Cup finale, was carried out by Harakat al-Shabab al-Mujahidin (Movement of Jihadi Youth), a radical Somali fundamentalist terrorist group. The BBC reports that al-Shabab has now taken responsibility.

The group resents the nearly 6000 African Union troops sent to Somalia for peacekeeping and training missions in support of the Transitional Federal Government formed in 2009. (The UNISOM web site is here). The factions supporting that government (many themselves fundamentalists or Sufis) have been fighting al-Shabab in the South. Uganda’s Deputy Foreign Minister, Okello Oryem, told AFP that he would not pull his troops from Somalia and denounced the al-Shabab strike as cowardly. Another 2000 African Union troops are expected in Somalia by September, bringing the mission’s strength to the target of 8000.

Reuters explores the possible impact of the bombings on Uganda’s economic progress, as the country revs up to become an oil state in 2011.