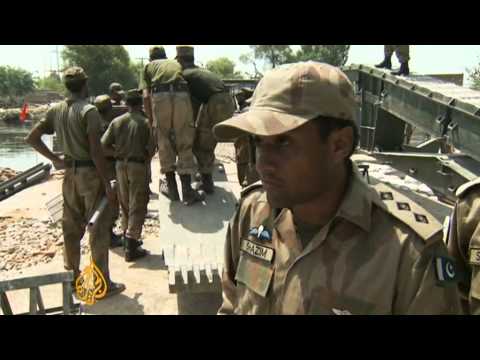 As Pakistan’s army and political elite focused on the catastrophic floods that have put a fifth of the country under water and displaced millions, militants in the mountainous northwest of the country struck on Monday with bombings that killed 32 persons and wounded 42.

The violence targeted figures involved in mediation between local authorities and the Taliban, and were probably intended by extremists to end such negotiations. In Wana, South Waziristan, a suicide bomber attacked the seminary of Maulana Nur Muhammad, a former member of the Pakistani parliament from the Federally Administered Tribal Areas who ran on the ticket of the Party of the Association of Muslim Clerics (Jami’at Ulama-i Islam (Fazl). This group is alleged to have helped produce the Taliban back in the 1990s so they are not exactly bleeding heart liberals and it is a little odd that the militants should have killed 22 persons at Nur Muhammad’s seminary. Dawn hints that the clergyman’s opposition to the Uzbek expatriates among the Pakistani Taliban may have led to the Uzbeks targeting. him.

Also, as elders of Khurram in FATA met to settle a dispute over who owned a local school, they were blown up by a bomb on a delayed timer, with 7 killed and 6 wounded.

As if to add injury to insult, the United States fired a drone missile at a compound owned by the shadowy Haqqani network in North Waziristan, killing 13 militants and 7 civilians, including women and children.

Given the state of Pakistan, you would think that the US could afford to call a Ramadan ceasefire in its constant bombing of Pakistanis. The deaths of women and children and innocent men in these raids makes for bad feeling toward the US, but especially during the fasting month of Ramadan and in the midst of a major humanitarian crisis? That’s the headline you want, ‘7 innocents killed by US drone’? Me, I don’t think that policy is appropriate to the moment.

WaPo explores the reasons for which the billions in US aid given since 2001 have not purchased for the US much good will in Pakistan. Washington has avoided iconic projects for fear they would be blown up by militants, and most aid is funneled through branches of the Pakistani government.

Back in Islamabad, President Asaf Ali Zardari said that it would take at least 3 years for Pakistan to recover from the deluge, though he admitted that in some ways the country might never be the same. He denied that it was likely that faction-fighting over control of the government would break out if a joint response were not worked out soon. He dismissed the ideas both of a military coup and of the fall of the elected government. He stressed that what Pakistan really needed at this juncture is greater access for its agricultural goods to advanced economies such as the US and China. Thus, he is asking for the US to lower its cotton tariff for Pakistan.

Many Pakistanis are angry at Zardari for undertaking a posh trip to Europe at a time when the floods were already devastating so many Pakistanis. They are also angry about the slowness of the government to help them in their moment of extreme need, though it is generally admitted that the army is doing what little it can.

Meanwhile, the flooding spread in Sindh. The News (Jang) reports:

‘ After the river surged enough to be in high floods at Jamshoro, Kotri and Thatta distrcits, tens of thousands of people, stranded in dozens of villages abutting three districts, are impatiently waiting for relief goods as their localities have been rendered completely submerged under floodwaters … 80 percent of Jamshoro District is presenting look of a lake following floodwater inundated villages there. Most parts of tehsils Manjhand and Sehwan Sharif are covered with floodwater, officials said.’