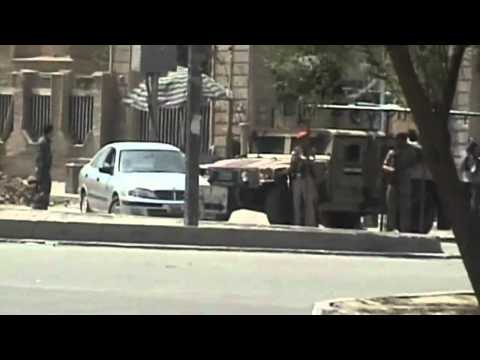 Five suicide bombers set off a minibus bomb outside the military facility at the old Defense Ministry building in Baghdad around 10 am on Sunday, killing 12 persons and wounding at least 36. According to WaPo, two of the assailants then got inside the building, where they were targeted by US soldiers, in the course of which the guerrillas’ bomb vests exploded. Outside, the other two were shot in the head by US snipers and their vest bombs disarmed.

Al-Ra’i writes in Arabic that the attack was launched at the back gate of the Rusafa military HQ.

The Iraqi version is that the assailants approached the back gate, and that the Iraqi soldiers guarding it were suspicious of the vehicle and opened fire on it. The Iraqi army killed one of the bombers. Then two other bombers fled into a building, where they were later killed when the American snipers targeting them inadvertently set off their belt bombs. It reports that the official Iraqi announcement said all 5 (or in some versions, 6) attackers were killed. Most of the dead, this article says, were civilians upon whom surrounding older buildings collapsed under the force of the initial blast.

One narrative in the Arabic-language article is that the two bombers who got inside a building took hostages, and the Iraqi officer corps suggested that the US military could better deal with this situation. If that story is true, it is ironic, because apparently the US shooters could not avoid setting off the hostage-takers’ belt bombs, which seems to have resulted in some Iraqi soldiers’ deaths.

So the details in the al-Ra’i article, for which I cannot vouch, actually seem to me to undermine the emphases of the Washington Post story.

1. The assailants tried to get the bomb-laden minibus close enough to the Rusafa HQ back gate to blow it up. They were stopped from doing so by alert Iraqi troops, who opened fire and killed one of the attackers. The exploding vehicle then damaged some century-old surrounding edifices, killing some 6 civilians and wounding at least 2 dozen more. So the Iraqi troops did a fair job of confronting this threat, and defended their HQ.

2. Two bombers managed to get into a military building and take some soldiers hostage. The Iraqi officers decided to have the hostage-takers taken out by snipers, and called on American soldiers for the purpose, in hopes they could kill the invaders without harming the hostages. Unfortunately the US soldiers could not avoid setting off the vest bombs of the assailants, with a consequent undetermined loss of life (one report says 6 killed) among the Iraqi soldiers taken hostage.

3. US snipers did successfully hit the two remaining bombers, still outside by the gate, in the head.

Far from a story of the Iraqi military being able to accomplish nothing without US soldiers, this is rather one of fair Iraqi military competence in stopping the truck bombing beyond the Rusafa HQ gate, and then calling on special US expertise in sniping for specialized mop-up operations. It is not clear that anything at all would have ended differently if Iraqi snipers had been used. Indeed, they probably would have been used if some American ones were not already present at the HQ, as will likely be the case in 18 months.

The other significance of the incident for American news outlets seems to be that it falsifies the Obama administration’s stand that the US has withdrawn combat troops from Iraq. But that some US soldiers were at the Rusafa HQ who had some sniping skills and were invited to use them by Iraqi officers doesn’t actually contradict Obama’s announcement that military units designated as combat units are now out of Iraq.

Of course, US troops in Iraq will go on fighting when attacked or when their skills are called on by Iraqi officers as long as they are in that country, i.e. for 18 more months. But I think it is clear that President Obama really is committed to withdrawing militarily from Iraq.