This looks to me like a sort of north-south global war, with the North inflicting profound damage on the South:

Here are carbon dioxide emissions per capita by country, calculated from data at the US Department of Energy’s Carbon Dioxide Information Analysis Center (CDIAC):

and here is the new Maplecroft estimation of the countries most likely to be adversely affected by climate change, as reported by WaPo’s Juliet Eilperin and Agence France Presse (including climate-related disasters, heightened competition for scarcer resources, and consequent security challenges)– shown in dark blue: 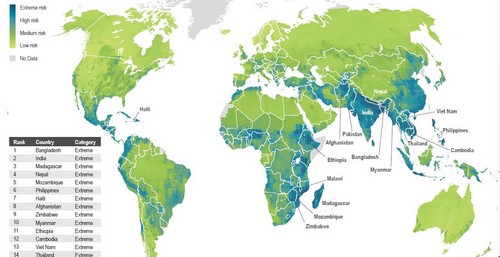 It is almost a mirror image, isn’t it? And, ironically, it looks like the North may for a while escape the worst consequences of its carbon profligacy, inflicting them on Bangladesh, Pakistan, India, Malaysia, and parts of Africa instead.

I don’t think Usama Bin Laden and Ayman al-Zawahiri are the last demagogues and terrorists in the global south who will attempt to mobilize hatred of the US and the other developed nations on this basis.