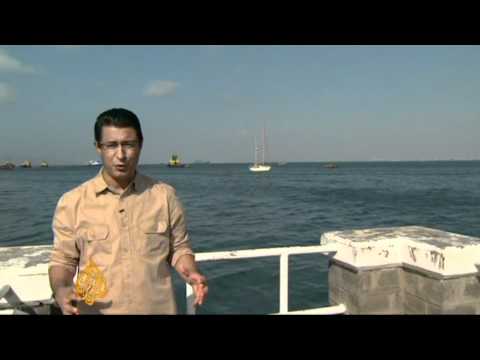 CNN reports that Saudi intelligence was the source of the information on the tracking numbers of two bomb packets sent by UPS and Fedex from Yemen by a single individual. The United States has thanked Saudi Arabia for the crucial intelligence tip. The packages were tracked down in Dubai, the United Arab Emirates, and at East Midlands Airport in the United Kingdom. One was intended for a synagogue in Chicago and the other for a Jewish community center. One of the bombs appears to have had a timer, while the other seems to have been intended to be set off by a cell phone call. It is being assumed that the individual who sent the bombs is a member of al-Qaeda in the Arabian Peninsula (AQAP). Both bombs were packed with PETN, the signature explosive for AQAP.

Al-Qaeda in the Arabian Peninsula is thought to be behind the attempted ‘crotch bombing’ by a Nigerian extremist recruited in Yemen, last Dec. 25 over Detroit. Among its ideologues is Anwar al-Awlaki, an American of Yemeni heritage born in New Mexico and brought up in the United States, who because of his opposition to the Iraq War emigrated to Yemen, from which he issues inflammatory videos attacking the United States. There are estimated to be only a few hundred al-Qaeda operatives in Yemen, and they have in recent months been chased from their former hideout of Ma’arib to Shabwah by the Yemeni army.

The CNN reports raise a number of questions.

2. How did the Saudis foil the plot?

3. Why turn to Unabomber tactics?

On January 13, 2010, the USG Open Source Center carried a report saying that Saudi citizens Sa’id al-Shahri and Muhammad al-Ufi, who had been at Guantanamo Bay but were released, were sent to Saudi Arabia where they underwent ‘re-education’ at a program run by the ministry of the interior. They then showed up in Yemen. Last year (2009), they put out a video in which they vowed to destroy “Jews, crusaders and puppet regimes.”

Likewise, AQAP ideologue Anwar al-Awlaki issued a proclamation in March, 2010, which was posted in English on radical bulletin boards and then disseminated by the USG Open Source Center:

‘ “Following 9/11, the American people gave George W. Bush unanimous backing to fight against the mujahedeen and gave him the blank check to spend as much as needed to fulfill that objective….
“On the eve of 9/11 it was Afghanistan alone today it is Afghanistan, Pakistan, Iraq, Somalia, North Africa, the Arabian Peninsula and the list is growing. How many more body bags are American families willing to receive? How much more can the US treasury handle? 9/11, the war in Afghanistan and Iraq and then operations such as that of our brother Umar Farouk which could have not cost more than a few thousand dollars end up draining the US Treasury billions of dollars in order to give Americans a false sense of security. For how long can the US survive this war of attrition?

For al-Qaeda, the term ‘Jews’ typically refers to Israelis. Despite what some analysts have alleged, enmity with Israel, especially over its occupation of the holy city of Jerusalem, has been an integral part of al-Qaeda all along and was among their motivations for hitting New York, with its large Jewish community and strong connections to Israel. It is not impossible that the prominence in the Obama administration of Chicago Jewish Americans such as former White House chief of staff Rahm Emmanuel and adviser David Axelrod drew al-Qaeda’s attention to that community. If so, AQAP is weak on logic, since Obama’s Jewish American advisers have been fighting for a Palestinian state and pressuring Israeli Prime Minister Binyamin Netanyahu.

If it is true that one of the bombs was designed to be set off by a cell phone call, that datum may point to the existence of an AQAP agent or cell in Chicago, which was intended to detonate it. Of course, a phone call could be made from anywhere. But a Chicago agent would help make sense of why a Chicago synagogue was chosen.

That the Saudis had tracking numbers for the packets that were sent would only be plausible if they had infiltrated the AQAP cell behind the plot. If so, they just lost their asset inside the organization, since only a few members would have had access to the tracking number and they will now all fall under suspicion.

‘I think there are other ways to get those tracking numbers; for example, if you have agents in UPS-Saudi Arabia, and/or collaboration with US intelligence. A package to a synagogue from Saudi Arabia, I will guess that this is something that does not happen every day. Couple that with a sender on a watch list, and you have your tracking numbers. No inside agent necessary, though the sender is now compromised (but this in turn confirms to intelligence that their suspicions were correct).’

As for the Unabomber technique of mailing bombs, it is a sign of a small cell lacking the resources for a more robust operation, and of a group lacking the kind of passion and organizing ability that would allow them to pull off a suicide bombing. Mailed bombs are not an al-Qaeda modus operandi precisely because they have a low chance of actually hitting their target, given the security procedures in place now. I conclude that this operation was not very serious, and it may even have just been a probe of how feasible the technique is.

Muslim-haters in the US will focus on AQAP as being a ‘Muslim’ organization, but will ignore the fact that Saudi Muslims foiled the plot and Yemeni Muslims have been involved in active combat with al-Qaeda.

Aljazeera English reports on the Yemeni government’s crackdown on al-Qaeda in the Arabian Peninsula. The report alleges that both the Yemeni government and the US have used excessive force in attaking AQAP, resulting in civilian deaths that function as a recruitment tool for al-Qaeda.