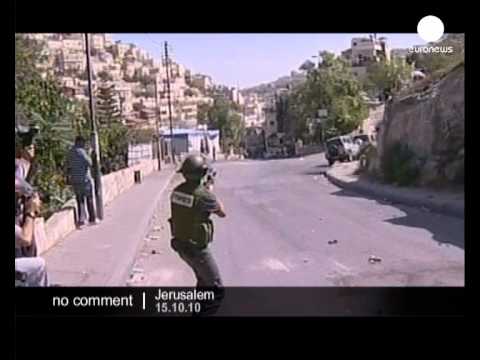 Several thousand Jews and Arabs marched in Tel Aviv on Saturday to protest the loyalty oath recently approved by the Israeli cabinet, which would force new candidates for Israeli citizenship to affirm their commitment to a “Jewish and Democratic” state. The measure was pushed by Avigdor Lieberman, the far, far rightwing leader of Yisrael Beitenu, the party of relatively recent immigrants to Israel from the former Soviet Union. The oath is considered racist by most Palestinian-Israelis and by many on the Israeli left.

For a view that the Netanyahu government that passed the measure is profoundly anti-democratic, see Gershon Gorenberg in The American Prospect.

In other news, the Israeli government’s announcement that it will build 240 housing units for Israeli immigrants into Palestinian territory around Jerusalem threatens to kill the fragile peace talks begun only last month. The Palestine Liberation Organization is adamant that it will not negotiate with Israel unless the settlement freeze is continued. This stance is shared not only by Fatah, the leading faction in the 7-group coalition but also by the others.

Israel invaded the Palestinian West Bank in 1967 and militarily occupied it, then illegally annexed some of it to an artificially created ‘Jerusalem district’ and then illegally flooded into the rest of it Israeli squatters. The United Nations Charter forbids the acquisition of territory by force. The 1949 Geneva Convention on the treatment of people in militarily occupied territories forbids the transfer of citizens from the metropole into the conquered land. Indeed, the 1907 Hague Convention on occupation forbids the occupier to substantially alter the lifeways of the occupied. Israel has thumbed its nose at international law and has stolen immense swathes of Palestinian territory in the greatest land theft of the last 3 decades.

The Israeli announcement of new building in the region around East Jerusalem provoked Palestinian demonstrations on Friday. Euronews has raw video:

Israeli Prime Minister Binyamin Netanyahu recently offered to attempt to convince his cabinet to continue the settlement freeze negotiated last year by US special envoy George Mitchell if Fatah would recognize Israel as a “Jewish state.”

Palestinian official Abed Rabbo offered to consider recognizing Israel if the Israeli authorities would only present the Palestinians with a map of what they were recognizing. Israeli officials going back to David Ben Gurion in 1948 have consistently refused to specify their country’s borders and have frequently attempted to expand them through warfare and annexing the land of neighbors. The Israelis proffered no map.

Here is where Friday’s demonstration in Jerusalem and Saturday’s in Tel Aviv might dovetail. Prime Minister Binyamin Netanyahu’s coalition partner, the Labor Party, is deeply unhappy with the announcement of the new construction, and says it wants to continue the peace talks. There is speculation that the Netanyahu government could fall over the issue.

The fall of the government would be the best thing that could happen, especially if a core Labor-Likud-Kadima coalition could be forged. Kadima favors a two-state solution and its leader, Tzippi Livni, has pronounced herself willing to take on the settlers in the Palestinian West Bank. Such a coalition might be able to drop the embarrassing far rightwing Yisrael Beitenu party and its highly corrupt and bigotted leader, Lieberman, currently making Israel a laughingstock by serving as foreign minister.

I am aware that Kadima and Labor are paternalistic toward the Palestinians and won’t want to give them a state with full sovereignty. But they at least would be willing to take steps in that direction, whereas the current government is dominated by parties that reject the 2 state solution out of hand.

The Tel Aviv demonstration is a further evidence of the revival of the Israeli peace movement, which Hamas suicide bombings had killed in the early years of the new century.