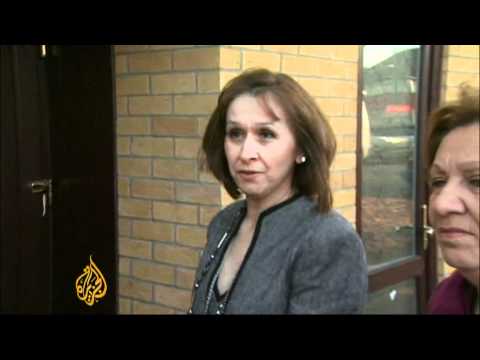 Update:: The NYT is reporting that on Wednesday morning, more bombings targeted Christians in Baghdad, leaving 3 dead and 28 wounded. Some of those hit were Muslims racing to help Christian neighbors. The bombers are radical Sunni Muslim extremists, “al-Qaeda” in the current parlance though they probably have nothing to do with Usama Bin Laden, who are bombing Shiites and Christians in the Iraqi capital to punish what they see as collaboration with the American invaders. The allegation of collaboration is incorrect– Iraqi Christians are nationalists and many were in the Baath Party or at least preferred it to more sectarian parties. And many Shiites in Baghdad are anti-American. But in extremist-world, symbols trump reality, and that the Americans are largely Christian and that they installed a Shiite government is all that counts.

In the wake of last week’s horrific bombing of Our Lady of Salvation church in Baghdad by Sunni Muslim extremists, , a Syriac Orthodox bishop residing in Britain, Archbishop Athanasios Dawood, called upon Iraq’s Christians to emigrate en masse. He says that the US and European countries, as well as neighbors such as Syria and Lebanon, should offer them asylum. There are said to be about 400,000 Christians left in Iraq, down from 800,000 before Bush’s invasion.

Dawood told CNN, “I say clearly and now — the Christian people should leave their beloved land of our ancestors and escape the premeditated ethnic cleansing. This is better than having them killed one by one…”

Dawood says that the Iraqi government is at best incapable of protecting the country’s Christians, and at worst itself riddled with extremists. He told Aljazeera that in this regard, the Baath government of Saddam Hussein had been better. Christians could live and worship in pre-American Iraq. Now, he says, living in Iraq is like living in the jungle.

Al-Maliki praised France for giving asylum to Iraqi Christians harmed by the church bombing in Baghdad last week, but he cautioned against emptying Iraq out of its Christian citizens through changes in Western immigration rules. Dawood’s position runs up against a tradition of Iraqi nationalism that takes pride in the country’s diversity and its minorities, which al-Maliki is invoking. Dawood is of course implicitly blaming al-Maliki for not providing security to Iraq’s Christians.

Christians predominated in Iraq before the Muslim conquests of the seventh century and only gradually for the most part converted to Islam. The 400,000 remaining Iraqi Christians thus uphold a tradition that goes back before the advent of Islam. But extremists often configure them as collaborators with the Americans, who are seen as Christians and Jews.

The US invasion of Iraq and the sectarian struggles it kicked off have left nearly 4 million Iraqis displaced, about 1 million of those abroad and 2.7 million inside the country. There is no sign of them returning to their homes, since their neighborhoods have been ethnically cleansed and their property mostly confiscated.

Many Iraqis feel that the deterioration of security is linked to the failure of Iraqi politicians to form a new government, 8 months after the March 7 elections. Not only is the executive a caretaker one, but Parliament has only met once. Members are accused of taking monstrous salaries and a fourth of them of living opulently abroad. Meanwhile bombings are taking a toll.