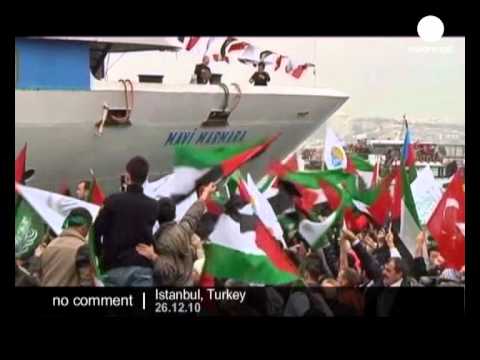 The Palestine Authority roundly rejected on Monday the suggestion by Israeli Prime minister Binyamin Netanyahu that an ‘interim agreement’ between Israel and the PA might be achievable even though the moment was not propitious for a comprehensive peace settlement. Three big issues appear to stand in the way of progress. The first is the Israeli refusal to halt land invasions of Palestinian territory by Israeli squatters while the negotiations over the future of the Palestinian West Bank is being negotiated. The second is Israeli refusal to consider the Palestinian demand that East Jerusalem become the capital of the Palestinian state. The third is the Palestinian insistence that some number of Palestinians be allowed to return to their homes in what is now Israel, from which they were expelled by militant Israel nationalists in 1947-48.

Netanyahu is a weak prime minister and, for all his bluster, a timid man not given to grand breakthroughs. He heads a shaky coalition of mostly rightwing parties that despise one another, with the division between the secular Russians of Yisrael Beitenu (Israel Our Home) and Shas (representing the fundamentalist ultra-Orthodox Jews) particularly bitter.

Netanyahu seems to have decided he needs Yisrael Beitenu more than he needs Shas, and increasingly appears to defer his Foreign Minister, the thuggish Avigdor Lieberman of Moldavia, who leads Yisrael Beitenu. Lieberman has humiliated Netanyahu twice in the past week, and forced his hand on three central issues.

Last weekend, the Mavi Marmara, the aid ship that tried to deliver humanitarian assistance to the civilian Palestinians of Gaza who labor under a brutal Israeli blockade, arrived back in Istanbul after undergoing repairs at another port. Israeli commandos had landed on the ship with guns blazing, killed 9 of its passengers, including one American, and commandeered it, attempting to spread lies that it held weapons (it did not) or was linked to terrorism (no, that was a different IHH). A huge demonstration was held at the dock in Istanbul by flotilla supporters, many of them Muslim fundamentalists, with fiery anti-Israel speeches and chanting, lamenting the loss of the ‘martyrs’, i.e. the 9 men killed by the Israeli troops. Although this video has no English voice-over, it is instructive to watch it:

Turkish Foreign Minister Ahmet Davutoglu did not attend the docking ceremony, probably not wishing to mingle too closely with the fundamentalists and also not wishing to give credence to (false) charges that the Turkish government was behind the aid flotilla to Gaza last May. But Davutoglu did give a speech in which he underlined that Turkey wanted to repair its relations with Israel but required an apology for the killing of its citizens in international waters, as well as reparations for the victims.

Without waiting to talk it over with his prime minister, Avigdor Lieberman promptly slapped Davutoglu around a little, calling him a liar, saying ‘we don’t need to be their punching bag,’ and saying that Davutoglu’s claim that Israel would not have jumped in to help Turkey as Turkey had sent firefighters to help put out the Carmel fires this fall showed ‘what kind of people those Turks are.’ (Prejudice against Turks is common in Eastern Europe, whence Lieberman hails, partly because of local Christian-heritage resentment of former Ottoman rule there.)

Netanyahu initially tried to put Lieberman in his place, saying there could only be one prime minister. But then he caved, and said that, indeed, Israel would not apologize to the Turks for the attack on the Mavi Marmara (at least he didn’t say ‘to those people’).

Lieberman also gave a speech saying that it is impossible to attain an over-all peace between Israel and the Palestine Authority at present and therefore progress should be made on more limited issues.

After criticizing Lieberman, Netanyahu then turned around and said Monday that an interim agreement of a more limited nature was possible. Netanyahu also gave into Lieberman on the issue of allowing parliament to vote on whether the head rabbi for the Israeli army can accept conversions to Judaism of troops (mainly ex-Soviets) without these being reviewed by the Chief Rabbi in Jerusalem. (Lieberman wants the military conversions to stand, since the official rabbinate has been reluctant to accept large-scale conversions by the hundreds of thousands of non-Jewish Russians who immigrated in the 1990s. The ultra-Orthodox Shas Party is upset by this step and is threatening to leave the government over it).

Since Lieberman is under investigation for major corruption and criminality, that he has become the puppet master of Netanyahu is disturbing in so many ways.

The Palestinians have decided that they are unlikely to have much success negotiating with a weak, far right wing, divided Israeli government that is anyway in the back pocket of the squatters (‘settlers’).

So the Palestinians have decided on a United Nations strategy. They are trying to get recognition of a Palestinian state based on the West Bank and Gaza with 1967 borders, before the Israeli occupation. They have succeeded in getting most of South America to recognize Palestine, and the Israelis were shocked to wake up to the news on Monday that the British iare upgrading the status of the Palestine Authority’s representation in London.

The Palestinians plan to declare their state mid-summer of 2011, and then take it to the United Nations General Assembly for a vote, which they will probably win. They seem to hope that this momentum in the GA will then translate into a UN Security Council resolution that would force Israel into serious negotiations. Since Netanyahu has repeatedly humiliated President Obama, with whom he does not get along, the Palestine Authority probably hopes that the US will decline to exercise its veto on Israel’s behalf at the UNSC on this issue. In the meantime, PA prime minister Salam Fayyad is strengthening security and infrastructure in the West Bank on the theory that he can build the state from the bottom up.

At this point, the Israelis and Paletinians have exchanged their historic roles. The West Bank Palestinians have a vision, are working diplomacy intensively, and have their act together. The Israelis are squabbling internally and needlessly alienating potential friends (like Turkey). Maybe now it is Tel Aviv that is never missing an opportunity to miss an opportunity.