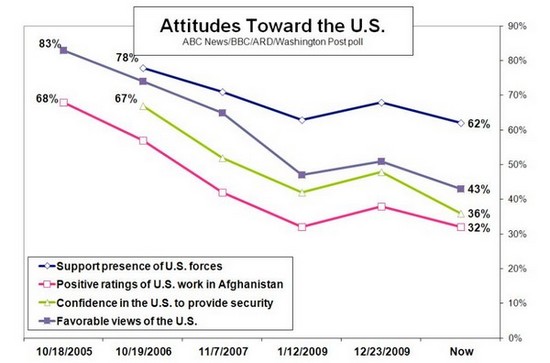 10. “There has been significant progress in tamping down the insurgency in Afghanistan.”

9. Afghans want the US and NATO troops to stay in their country because they feel protected by them.

8. The “surge” and precision air strikes are forcing the Taliban to the negotiating table.

7. The US presence in Afghanistan is justified by the September 11 attacks.

6. Afghans still want US troops in their country, despite their discontents.

5. The presidential elections of 2009 and the recent parliamentary elections were credible and added to the legitimacy of Afghanistan’s government.

4. President Hamid Karzai is “a key ally” of the United States.

3. Shiite Iran is arming the hyper-Sunni, Shiite-hating Taliban in Afghanistan.

2. Foreigners are responsible for much of Afghanistan’s fabled corruption.

1. The US is in Afghanistan to fight al-Qaeda.