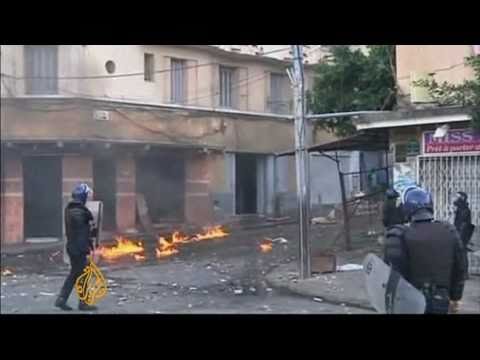 Some 24 persons have been killed in clashes between protesters and government security forces in Tunisia. The government has closed schools and universities “indefinitely” as a way of demobilizing youthful protesters.

The Arabic press is reporting that Tunisia has called the US ambassador on the mat, and has called back its own ambassador in Washington, to protest statements by US officials that were critical of the regime’s actions and called for adherence to human rights norms.

The troubles broke out this winter when two unemployed workers in turn committed protest suicides. The permit of one as a street vendor had been pulled, and he was unable to get other work, and the government office concerned refused to meet with him. Students struck in solidarity with the unemployed, as have most attorneys, and now the situation has spiraled out of control. The students mind not only the high unemployment but the restrictions on civil liberties imposed by the secular, Arab nationalist regime. The regime of Zain Bin Ali, like that of Hosni Mubarak in Egypt, is a hybrid. It has a heritage in the Arab nationalism of the 1950s. But it has also been kept going by a cozy corporatism of army, business and cvilian politicians, and by an iron fist in a velvet glove, and has developed neo-liberal tendencies that benefit the rich and upper middle class but leave substantial numbers of farmers and urban workers out of the new prosperity.

Zain Bin Ali has responded by promising to put college graduates, who have been out of work for 2 years, into a new job, and to create 300,000 jobs over all. He labeled the protesters “terrorists.”

The question is whether Tunisia is a harbinger of things to come in other sclerotic nationalist regimes such as Egypt and Syria.

Note that since the Tunisian crisis has to do with labor unions, unemployment, class anxieties, and a student youth movement rather than with Islam; and since the Tunisian government is counted as a firm US ally, the American mass media is largely ignoring this story. Ordinarily if it bleeds, it leads; but not when it is about class instead of about race or religion, since the latter categories are the only ones useful to monopoly capital in keeping ordinary people divided and distracted.

Aljazera English has a video report:

The unemployed also commit suicide, at a rate 2 to 3 times greater than ordinary in the United States. In the US, workers are no longer organized by labor union (it is only about 12% that are). The unions were broken in the US, starting with Ronald Reagan. Thus, despite high unemployment, Americans now lack the organization to protest the way in which everyday workers have been badly treated while the bankers who caused the financial meltdown in 2008 have largely skated free, and, indeed been rewarded with hundreds of billions of dollars from the tax monies of the workers whose lives they destroyed.