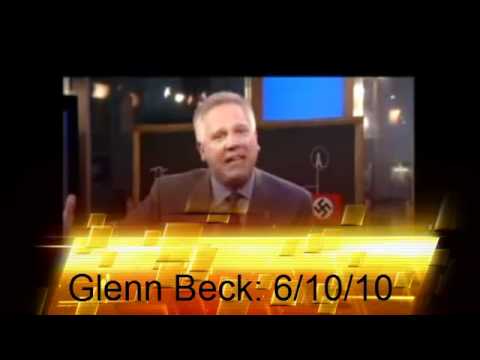 On June 10, 2010, Glenn Beck painted a picture of the Democratic Party as deeply divided into a front group (President Obama, Nancy Pelosi) and a set of radical backers, whom the front group had used and to whom they had made promises. Among the alleged radical backers was Bill Ayers, the former Weatherman whom Republicans had attempted to tie to President Obama, and his wife Bernadine Dohrn.

Beck predicted a civil war between the front men and their radical, Marx-worshiping backers, warning politicians in Washington that ultimately, “You’re going to have to shoot them in the head.” He seems to have meant that ordinary Democrats would eventually have to shoot Bill Ayers and Bernadine Dohrn in the head. Beck speculated, “or they may shoot you.”*

Beck was certainly implying that Representative Gabrielle Giffords, a Democrat in Congress, was a tool of Marxist terrorists, and he implicitly predicted that either she would shoot them in the head or they would shoot her.

Since Beck’s premise, that the Democratic landslide of 2008 was actually a Communist conspiracy, belongs in the therapy transcripts of inmates in your local insane asylum, it is painful to have to explain and correct it. But since Rupert Murdoch is spending hundreds of millions of dollars to broadcast this sewer sludge to millions of people, it is impossible to ignore. Beck and his fellow travelers have a long history of violent rhetoric and fantasizing on air about killing people.

Beck’s scenario– wherein the Democratic establishment in Washington is actually a facade for a group of powerful Communists and former terrorists, and that the two will go to war with one another when congressmen cannot deliver on their wild promises to the Marxists — is completely insane.

His fantasy discourse of pornographic violence between his comic book protagonists has polluted our airwaves and put nutty, sanguinary ideas out into the ether, where the unstable have heard them.

For an overview, see Ryan Witt.

*Although Ayers has admitted setting protest bombs during the Vietnam War, one at the Pentagon, he never hurt anyone, and charges were dropped against him over three decades ago because of government misconduct. Both would be fairly characterized as peaceful ex-radicals. In recent years Ayers taught about K-12 education at the University of Illinois and worked with Mayor Richard Daly on school reform. Dorhn became a Northwestern University law professor. Ayers is accused of having said in an NYT interview in 2002 that he regretted that he “hadn’t done enough” to stop the Vietnam War, which is estimated to have killed between 1 and 2 million Vietnamese, mainly farmers. He later clarified that he had not meant that he wished he had set more bombs, though Beck continues to misquote him.