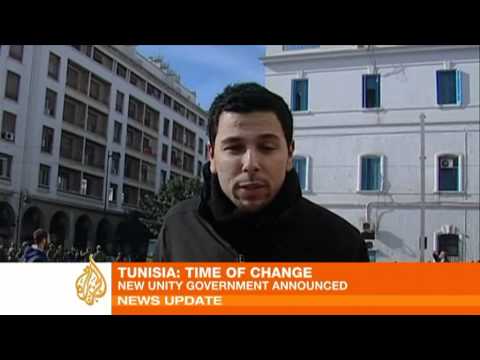 The Constitutional Democratic Rally (RCD) managed to remain in control of Tunisia on Monday, with Prime Minister Mohamed Ghannouchi announcing a national unity government in which his party retained the most powerful posts. He did bring some 9 opposition party members into the cabinet. The not-altogether-new government was greeted with disbelief, dismay and extreme suspicion by most activists, and provoked new (though small) demonstrations.

Update: Three of the new cabinet members, from the General Union of Tunisian Workers (UGTT), announced Tuesday morning that they were pulling out of the government. This as protests started back up not only in Tunis, but, according to the BBC, also in rural towns — “Sfax, Regueb, Kasserine and Sidi Bouzid.” The protest movement was rejecting the idea that Ghannouchi, a long-time Ben Ali associate, should lead the interim government, or that the cabinet should be so heavily dominated by RCD members. The UGTT held a general meeting in which it decided that it would withhold recognition from the new government.

Ghannouchi hopes to hold on. Playing to the Twitter and Facebook crowd, Ghannouchi abolished the Ministry of Information (i.e. censorship, a la Orwell) and announced “the complete liberty of information.” He promised that political prisoners would be released and said all political parties would be “immediately” legalized. He announced that all Non-Governmental Organizations were now free to, well, organize.

Ghannouchi’s hand was strengthened by events on Sunday, in which the Tunisian military took on those elements of the secret police and the presidential guard still loyal to ousted president Zine Ben Ali. These sinister forces had been engaged in sabotage, looting, and attempts to occupy symbolic sites such as the presidential palace, which the army took away from them. Some alleged that Ben Ali had planned the rear guard action to destabilize any new government and prepare the way for his return. In smaller towns, neighborhood militias armed with sticks and pitchforks had made common cause with the regular army against Ben Ali loyalists. Thousands were apprehended. As had Saddam Hussein, the Ben Ali forces attempted to let criminals out of jail as an element of destabilization. One provincial attempted jail break resulted in a fire and ended tragically, with dozens of inmates dead. By Monday, some Tunisians appeared to have come to fear the disorder that had been unleashed more than they feared that some Ben Ali colleagues would continue in power.

The new government pursued the arrest or exile of the Ben Ali and Trebelsi clans, family mafias of the former president and his first lady. According to a US embassy cable from 2006 released by the Aftenposten, 50% of Tunisia’s economic elite were related in one way or another to Zine and Leila Ben Ali. If this elite is now being arrested, exiled, and expropriated, then what has happened would meet the definition of a social revolution proposed by Theda Skocpol (5% or more of national wealth changing hands). It is the end for now of a kleptocracy. Madame Ben Ali alone was accused of spiriting 1.5 tons of gold out of the country last month. Tunisian economists are talking about the need to completely reconstruct the economy and the banking system now that the Trabelsi mafia is on the run.

As either a state secretary of Youth and Sports (or possibly deputy minister (it is not clear yet), the government brought in Pirate Party activist Slim Amamou, whom Ben Ali had imprisoned. He had been an prolific blogger and internet activist in the movement to bring down the president. Amamou, who was in jail last week, is now part of the government. His platform? He is “against censorship, against the intellectual property rights, for net neutrality…”

Opposition leader Najib Chebbi, who heads the opposition Progressive Democratic Party, was made minister of regional development. The Health Minister is now Mustafa Ben Jaafar, leader of the Union of Freedom and Labor. Ahmad Ibrahim of the Al-Tajdid (Renewal) Party became minister of higher education. Opposition parties so opposed to the RCD that they had had to go into exile in Western Europe were not included in the new cabinet, including the Muslim fundamentalist al-Nahda.

The continuation of the RCD government was too much for some protesters. About 2000 gathered in downtown Tunis to demand that Ghannouchi go, to be met with tear gas and water cannons. The prime minister said that he had been unaware of any corruption, and people on Twitter asked what country he had been prime minister of. It was alleged that he had called Ben Ali to update him on developments, which angered the protest movement no end.

Elections have been put off for six months. It seems to me unwise of the RCD elite to have kept on Ben Ali’s prime minister, and to have attempted to continue to dominate the government for so long after this public explosion. They should have moved more quickly to distance themselves from the old regime, and to mollify the inflamed public with early elections (admittedly hard to organize on short notice). As it is, they are risking another run-in with the public, especially since they are now allowing people freely to communicate and organize.

On the other hand, if they can convince people that a free and fair election season has opened, they might be able to channel public energies into that.