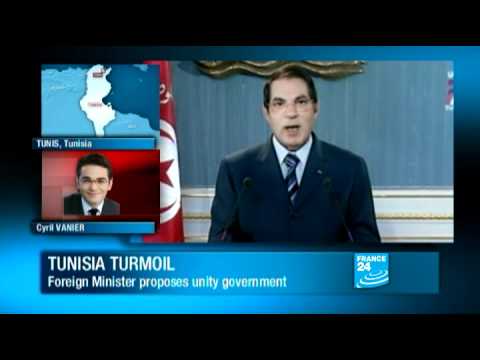 Tunisian President Zine al-Abidin Bin Ali has fled the country before the advancing crowds pouring in to the capital’s center. A French eye-witness said of the masses thronging Bourguiba Avenue that “it was black with people.” The Speaker of Parliament [first minister] is caretaker leader of the country, though Aljazeera is reporting that there are already demonstrations in the southern town of Qabis rejecting him, as well. The dramatic events in Tunisia yesterday and today may shake the Middle East, as my colleague Marc Lynch suggested. As usual, the important news from the region is being ignored by US television news. (Here is an English-language eyewitness blog from one corner of the country).

In some ways, the Tunisian Revolution is potentially more consequential for the Middle East than had been the Iranian one. In Iran, Shiite ayatollahs came to power on the back of a similar set of popular protests, establishing a theocracy. That model appealed to almost nobody in the Middle East, with the exception of Shiites in Iraqi and Lebanese slums; and theocratic Shiite Arabs were a minority even in their own ethnic group. Proud Sunni Arab nationalists, in Egypt, Syria, and elsewhere, saw nothing to like there, even though they were saddled with a motley assortment of authoritarian presidents for life, military dictators, kings and emirs. Iranian leaders were shocked and dismayed to find that they had made a ‘revolution in one country.’ Their influence would come from championing the (Sunni) Palestinians and supporting Lebanon when it was attacked by Israel, not from their form of government. Iran was not like the French revolutionary republic, which really did become a model over time for much of Europe. It was an odd man out.

The Enlightenment principle of popular sovereignty has been mostly absent in the Arab world, and elections have been an odd Soviet-style shadow play, merely for show lest the dictators and kings be seen to be medieval in lacking anything called a parliament. Lebanon has been an exception, but with a population of 4 million it is a tiny country. The Kuwait parliament has shown signs of life, but in a constitutional monarchy where it was considered gauche to sharply question a cabinet minister related to the king, those are baby steps. It is too soon to tell if American-sponsored elections in Occupied Iraq are sustainable, and you can’t talk about popular sovereignty in a country occupied by foreign troops.

Of course, there is no guarantee that Tunisia will now move in a democratic direction. The demands of the protesters have to do with high food prices and unemployment.

Revolutions are always multiple revolutions happening simultaneously. In Tunisia, there was first of all a revolution of the blocked, educated middle class. The unemployment rate for the college-educated is 20%. The protests late last December were kicked off by the self-immolation of a college graduate who had been reduced to peddling vegetables, and then who lost his license from the government even to do that. The French eyewitness to the massive demonstrations downtown Tunis spoke of seeing ‘entrepreneurs, attorneys, physicians in smocks, students… in short, it was the population in general…” But of course he hasn’t described the general population, he has described the middle classes. Their placards, he said, read: “Bread and Water, but not Ben Ali” and attacking the sinister behind-the-scenes power of Leila Trabelsi Ben Ali, the dictator’s wife, whom they derisively called ‘the Hairdresser.’ (Shades of Marie Antoinette!)

The first lady, called ‘the regent of Carthage’ and ‘la Presidente’ (feminine of ‘president’) was accused in some quarters of having used her marriage to the president to grab control of the economy and to put her Trabelsi clan in influential political and economic positions. Her daughters married among the richest men in the country. It has been alleged that 7 great clans had controlled most of the country’s economic resources, and hers was added to them. She is said to have studied literature in college, though whether she graduated is controversial and she might have finished up as first lady by correspondence school. She is said at one point in the 1980s to have run a unisex hair salon frequented by powerful men, allowing her to engage in social climbing. Some Tunisian journalists from the late 1990s accused her of being too powerful and of having aspirations to succeed her husband.

But it would be wrong to see the revolution only as a middle class movement against corruption and nepotism, fueled by facebook status updates and youth activism. The trade unions (al-niqabat) played an essential role, and were among those demanding the departure of the president. You don’t get massive crowds like the one in Tunis without a lot of workers joining in. There are few labor correspondents any longer, and the press downplays the role of workers as a result of neither having good sources among them nor an adequate understanding of the importance of labor mobilization. It is no accident that on Wednesday the head of the Communist workers movement was arrested (he has been released).

The rural areas should also not be underestimated. The protests began in a small rural town, and have been nation-wide, not just in the capital. The role of rural workers is clearly important, and likely rather more important than Facebook.

The political parties in Tunisia are weak, but they did play a role, with everyone from progressives, to liberals, to the an-Nahdah Muslim party mobilizing and making demands.

Likewise, there is evidence of a classic revolutionary situation insofar as the armed forces split. Ben Ali angrily removed his army chief of staff recently on discovering that the army was confining itself to defending government buildings but declining to fire on the demonstrators.

The big questions are what comes next and how influential it will be. Mohamed Ghannouchi, the former prime minister and speaker of the house who is now interim president, has pledged early elections. It is not clear that he can remain in power to be the one overseeing them. Will the old clan patronage system reassert itself through the elections, or will the political revolution turn into a social revolution with a turn to social democracy? Will the odious French president Nicolas Sarkozy intervene behind the scenes in favor of the Tunisian Right?

As for the question of influence further afield, we should remain cautious. In the Middle East, every tub has so far been on its own bottom. Nobody in Tunisia cited Turkey as a model for what they were doing. People care about their own country and its problems, not about shining beacons on the hill. (And pace the Neoconservatives, no one in the Arab world thinks Iraq is anything they’d like to emulate).

But since Tunisia is Sunni and Arab, it would not be embarrassing for Egyptians, Algerians, Syrians and Jordanians to borrow its techniques and rhetoric for their own domestic purposes, which makes it potentially influential. Certainly an alliance of frustrated BA holders, professionals, workers, farmers, progressives and Muslim activists that results in a parliamentary democracy would likely have more resonances in the Arab world than Iran’s authoritarian rule by ayatollah (Sunnis don’t have ayatollahs). It remains to be seen if little Tunisia is the start of something, or one more false dawn.

France 24 reports on the aftermath of Zine al-Abidin Bin Ali’s initial offer to step down in 2014 and form a national unity government, before his flight from the country.

Updates can be seen at Twitter, hash tag #sidibouzid.