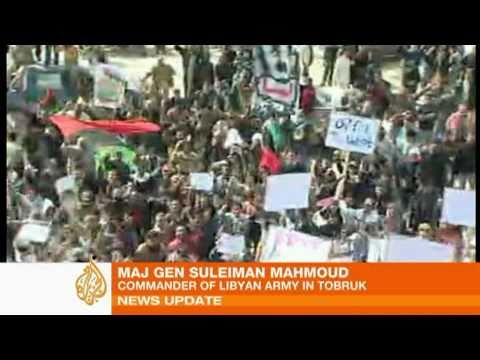 The LAT reports that the rebellion against Muammar Qaddafi’s 41-year dictatorship in Libya headed toward an end-game on Wednesday, as Misurata, the country’s third-largest city (pop. 600,000), fell to the opposition. Significantly, Misurata is in the west of the country, where support for Qaddafi had been stronger. It is only 100 miles east of the capital, Tripoli.

Most of the country stretching from the outskirts of Tripoli east toward Egypt is now in the hands of popular committees allied with local security forces that have defected from the dictator. Even to Tripoli’s west, the rebellion had spread to some small towns. Qaddafi is increasingly left only with a sullen and sanguinary Tripoli, about 1 million people, where the streets are ghostly and marauding security forces hotrod it through the streets, sometimes firing indiscriminately.

Aljazeera Arabic is making the point that a lot hinges on the Libyan tribes’ response to the crisis. The reporter says that the officer corps is actually an assemblage of tribal notables cultivated by Qaddafi over the years, and in the end tribal loyalties may win out. The BBC concurs.

Thus, The city of Az-Zintan 150 km to the southwest of Tripoli is a major tribal center, Including of the powerful Warfala tribe, which has turned on Qaddafi. The az-Zintan tribes are even facilitating the volunteer activities of youth who want to go to the capital and help rescue its besieged population.

The former leader of the Awlad Sulaiman tribe, Sheikh Saif al-Nasr, went on Aljazeera and broadcast an appeal to the young people of this tribe and others in the south to join in the protests and end the dictatorship.

Likewise, the Tarhun tribe has largely washed its hands of Qaddafi. It is key because about a third of the residents of Tripoli belong to it.

And even some members of Qaddafi’s own Qadhadfa tribe are turning on him.

On the Libyan-Egyptian border, Members of the Awlad Ali tribe, who trace their origins back to Libya, condemned the iron-fisted crackdown of the regime.

Aljazeera reports on the spread of the rebellion to new cities, including Misurata:

Aljazeera English has video on the regime’s continued tactics of brutal oppression.