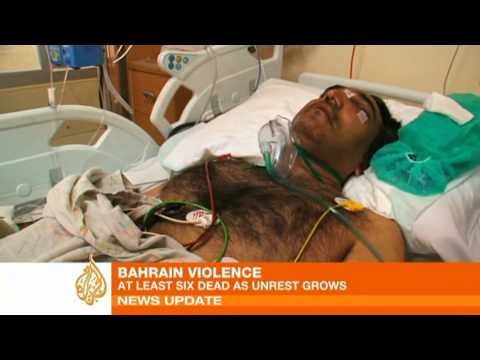 Members of parliament from the Shiite Wifaq Party, which had 18 of 40 seats in the lower house of the Bahrain legislature, have resigned en masse from their positions. They were objecting thereby to the deaths so far of 5 protesters and the brutal crackdown on peaceful demonstrators early on Thursday morning by government security forces.

Streets were empty late Thursday in Manama, in the wake of the clearing of the downtown Pearl roundabout of demonstrators by security police, who took down their tents.

Euronews in Arabic reports that the Bahrain army stationed tanks in downtown Manama and then announced a ‘Communique No. 1’ in which they pledged (or threatened) to use decisive force to establish ‘order’ in the country (i.e. no more big demonstrations will be tolerated).

In the meantime, physicians and nurses demonstrated at having been prevented from treating in the field the hundreds of injured after the crackdown on Thursday morning.

Friday morning, a small group of 200 mourners came out for the funeral in a village of protesters killed by security police on Thursday. They chanted slogans calling for the overthrow of the Sunni monarchy.

Both the withdrawal of Wifaq from the government and the turn of chanting to anti-monarchy slogans are very bad signs for national cohesion. The Shiites of Bahrain, about 70% of the citizen population, have now largely withdrawn from the body politic, remaining only as disenfranchised and sullen subjects of a monarchy many can no longer abide. Many Shiites are saying that the government, by attacking peaceful protesters, has lost all credibility.