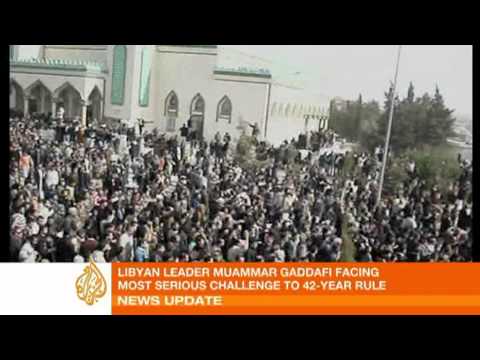 The strafing and bombardment in Tripoli of civilian demonstrators by Muammar Qaddafi’s fighter jets on Monday powerfully recalled the tactics of some decades ago of Benito Mussolini, who spoke of imposing a ‘Roman Peace’ on Libya.

In 1930, under Mussolini’s governor of Libya, Rodolfo Graziani, some 80,000 Libyans were removed to concentration camps, where 55% of the inmates perished. In 1933-1940, Italo Balbo championed aerial warfare as the best means to deal with uppity colonial populations. Between 1912 and 1943, half of all Libyans were killed, starved or chased from the country by the Italian colonial regime.

American pundits speak glibly of “Islamofascism,” thus deeply insulting Muslims by tying their religion to a Western political movement. What they do not know is that Libyan Muslims suffered mightily at the hands of the real fascists. The movement of Omar Mukhtar, the school teacher who turned anti-colonialist revolutionary, was repressed by Italian fascism.

Reuters has video of Qaddafi in the rain denying he is in Venezuela:

Aljazeera English has more on the massacres.