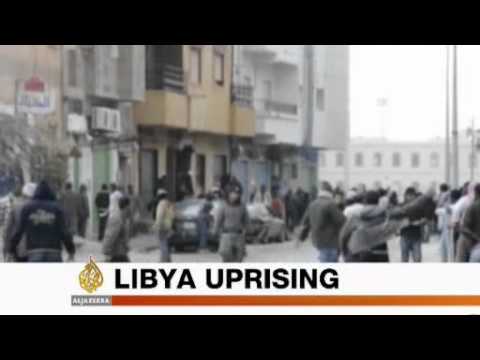 I am watching Aljazeera Arabic, which is calling people in Tripoli on the telephone and asking them what is going on in the capital. The replies are poignant in their raw emotion, bordering on hysteria. The residents are alleging that the Qaddafi regime has scrambled fighter jets to strafe civilian crowds, has deployed heavy artillery against them, and has occupied the streets with armored vehicles and strategically-placed snipers. One man is shouting that “the gates of Hell have opened” in the capital and that “this is Halabja!” (where Iraqi dictator Saddam Hussein ordered helicopter gunships to hit a Kurdish city with sarin gas, killing 5000 in 1988).

Two defecting Libyan pilots who flew to Malta confirmed the orders to strafe the crowds from the air and said that they declined to obey the order. Other pilots appear to have been more loyal.

YouTube video shows buildings on fire or burned out in the capital, or with holes in the walls, evidence of violence through the night and into the morning. There are reports of a massacre of protesters in the central Green Square of Tripoli, with “too many bodies to count.”

Aljazeera English has some video:

Qaddafi’s strategy is an Iraq 1991 gambit, where Saddam Hussein remained in power after the Gulf War by deploying his Republican Guards tank corps and helicopter gunships against civilian crowds in Najaf, Basra and elsewhere. In Iraq, this strategy was successful in part because the Sunni officers knew that if the protest movement succeeded, the Shiite religious parties would come to power and subject the Sunni Arabs. The Iraqi armor and helicopter pilots therefore remained loyal to Saddam, and succeeded in their repression.

Qaddafi does not have a similar ethnic divide to help shore up the loyalty of his officer corps, though of course he has advantaged some tribes and groups more than others. His massacre on Monday seems to have created a split in the Libyan elite around him, with key diplomatic personnel resigning and some military men defecting.

For more on his style of governing see [pdf] Mohamed Berween, “The Political Belief System of Qaddafi” The Journal of Libyan Studies, vol. 4, no. 1 (Summer 2003).

The cries of the Tripoli residents witnessing the massacre around them may be the death knell of the Qaddafi regime.