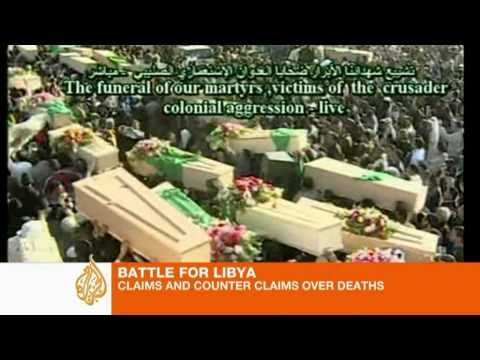 The leadership of the United Nations-authorized No-Fly Zone over Libya will pass from the US to the 28 nations of NATO, after an agreement was hammered out with skeptics such as Turkey and Germany. Since the US is part of NATO, it will still be involved in the effort, but the leadership will be NATO as a whole.

In the meantime, signs are emerging that isolated pro-Qaddafi forces may be seeking negotiations with the Benghazi-based liberation movement. Politics in tribal societies is often fluid and fast-changing rather than institutionalized and rigid, which is why descriptions of the conflict in Libya as a concrete struggle between well-defined groups is an error. The million-strong Warfalla tribe appears to have flipped allegiance twice already in the past month and could easily do so again. The tendency to quick switches in allegiance also make it less important that the rebels have so few trained troops. My guess is that people-power will be decisive in most cities if Qaddafi’s tank brigades can be neutralized– i.e. the rebels may not make many conventional conquests.

NATO is buttressed by the Arab League with regard to the UN-authorized No Fly Zone. The United Arab Emirates has now committed 12 fighter-jets to doing patrols, joining Qatar, which has pledged to begin flying missions this weekend. The French insist that the No-Fly Zone will be a relatively short-lived affair, measured in weeks rather than months.

Beneath the level of the No-Fly Zone is the further directive from the UN Security Council that civilians be protected from attack. This effort requires occasional bombardment of aggressive pro-Qaddafi armored and artillery units making a drive on rebel cities, as with France’s destruction of the tank brigade heading for Benghazi last Sunday. NATO will not direct this task, since Turkey and Germany think it goes too far in the way of intervention, so a sub-NATO UN alliance will pursue it, probably led by France.

The “No-Drive Zone” policy pursued by France, Britain and the United States is already bearing fruit on the ground. There were three major aggressive campaigns being waged by the Qaddafi forces as the UN allies began intervening– Zintan in the southwest, Misrata just to the east of Tripoli on the coast, and Ajdabiya in the east, south of rebel HQ Benghazi. Two of them ceased on Thursday, forestalling further massacre of civilians in these major population centers and allowing supporters of the liberation movement to come out of hiding. Ajdabiya remained an arena of contest, but the liberation movement now controls most of th is oil city and there were reports of negotiations.

The liberation movement in Misrata, a city of 570,000 and Libya’s third-largest, are claiming to have retaken it. They describe battles with pro-Qaddafi snipers, in which the locals took out the rooftop shooters. They used stairwell bombs to strand some on the roofs before targeting them. Some pro-Qaddafi tanks remained in the city. But tanks outside it were targeted by the UN allies on Wednesday night and the rest appear to have decided to stop firing on the city center and at the hospital lest they attract unwelcome attention from the skies. The ‘No-Drive Zone’ effort is therefore apparently having a psychological effect already, and is responsible for Thursday’s quiet in Misrata, which had seen a week-long, vicious tank campaign to take it by Tripoli. French fighter jets destroyed a pro-Qaddafi plane near Misrata that violated the No-Fly Zone.

Likewise, Qaddafi’s tanks appear to have drawn back from the rural southwestern city of az-Zintan (pop. 100,000), near Yafran, which is a major rebel center. (The Zintan tribe declared against Qaddafi). The city is no longer surrounded or actively being bombarded, though some 30 tanks remain outside it. Since pro-Qaddafi forces around Zintan have not been bombarded by the UN allies, it is not known why they ceased fighting on Thursday, but it may be fear that violating Resolution 1973 will bring down sidewinder missiles on them.

There are reports of renewed fighting in the western cities of Zawiya and Zuara, which were taken last week in major tank offensives by Qaddafi, but the populations of which had earlier declared in the tens of thousands for the liberation movement. The transitional governing council in Benghazi alleges that Qaddafi’s troops committed a massacre in Zawiya.

The Telegraph reports that a liberation movement commander and former Libyan air force colonel named Ahmed Omar Bani has said at a news conference that Qaddafi’s forces at Ajdabiya have lost contact with their commanders in Tripoli and are seeking a way to withdraw. He said that Muslim clerics (ulama) had been used by Benghazi to negotiate with the tank brigade that controls part of the oil city of Ajdabiya but which is far from the Qaddafi lines and vulnerable to further UN allied air strikes. According to the Telegraph Col. Bani said,

Aljazeera English reports that opposition fighters now control most of Ajdabiya, with the exception of two tank formations near the southern city entrance: