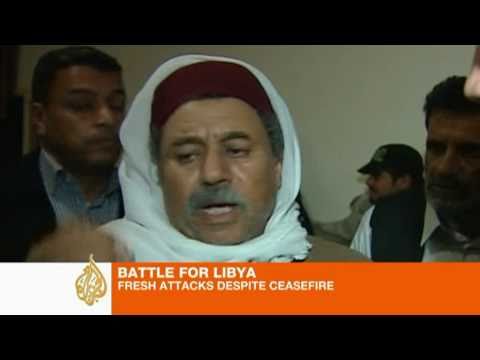 The government of Muammar Qaddafi is making a wideranging attempt to dominate as much of the country as possible before Western powers begin patrolling Libya’s skies with fighter jets, probably on Saturday night or Sunday.

Aljazeera Arabic is reporting mid-morning Saturday Libyan time that hundreds of people have been wounded in Benghazi by the heavy bombardment to which Qaddafi forces have subjected the rebel center. Government troops are said to have entered the environs of the city and put some rebel forces to flight. Residents are shown alleging that Qaddafi’s forces are continuously bombarding Ajdabiya and Benghazi with indiscriminate tank and heavy artillery fire, hitting civilian apartment buildings and killing and wounding women and children in them. There is heavy fighting at Magrun just to the south of Benghazi, according to Aljazeera’s English web site.

The pan-Arab London daily, Al-Sharq al-Awsat [The Middle East] reports that rebel sources say that the Qaddafi regime continues to mount heavy attacks on the city of Misrata, about 140 miles east of the capital, Tripoli, producing an ever increasing toll of dead and wounded. On Friday, Qaddafi’s forces allegedly killed 4 persons and wounded 70 in the course of tank and artillery bombardments of the city. The rebels rejected an offer of amnesty from the Qaddafi forces if only they would lay down their arms.

Aljazeera English has video of fighting at Misrata:

Al-Sharq al-Awsat says that Qaddafi’s brigades in Misrata attempted to separate the western suburbs of the city from the rest of it, after deploying in large numbers on the coastal road. The rebels say that they laid several successful ambushes and were able to frustrate the Qaddafi forces’ attempt to push forward, as well as to inflict substantial casualties on them. They claim to have captured 20 loyalist fighters. The independent site “Libya Jil” said it had confirmed reports of Qaddafi forces turning tail and fleeing after the rebels stopped them at the western entrance to Misrata and inflicted on them numerous casualties. Some of the Qaddafi loyalists were being mopped up by the rebels, especially in al-Qushi, where they had surrounded them. The rebels lost 4 dead in the engagement. On Friday night the rebels fought off another attack.

Other Libyan sources, including the independent Libyan Information Center, said that there were fierce battles around Ajdabiya to the south of rebel HQ Benghazi. There, rebels said they stopped an attack led by Khamis Qaddafi, a son of the dictator, and forced the remnants of his brigade to flee to the south after they were surrounded in eastern Ajdabiya. The sources say that as the Qaddafi forces retreated, they subjected the city to indiscriminate fire, as well as targeting infrastructural targets such as electricity and water plants.

Ibrahim Umaish of the Political Circle in the oppositionist National Libyan Coalition said that Qaddafi deployed tanks and land units against cities on a vast scale. Fighting broke out again in the western suburbs of Tripoli, as well as in the town of Yifrin in the Western Mountain region southwest of the capital and in Nalut on the Tunisian border. The rebels claim to have inflicted casualties on the troops that launched this campaign. The rebels in Nalut assert that they fought off the pro-Qaddafi attackers.

The protesters in west Tripoli may have come out as part of a strategy of testing Qaddafi’s compliance with the UNSC demand he allow peaceful protest. Rebels think that if he puts down the demonstrations, he’ll demonstrate his non-compliance, whereas if he allows them, he will be shown to be generally unpopular.

The widespread attacks by Qaddafi forces came despite the UN Security Council cease-fire resolution and the Tripoli government announcement that it would abide by it.

The western tribal city of Zintan was also allegedly the site of battles on Friday into Saturday morning.

Aljazeera English reports on how the proposed no-fly zone authorized by the UNSC might work:

But more of the country may fall to Qaddafi’s fierce attacks if the UN-sanctioned aerial patrols do not begin soon.