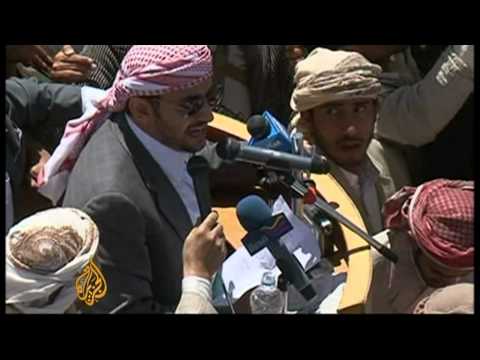 10. In the Sunni-ruled monarchy of Bahrain, which has practiced employment discrimination against the Shiite majority of citizens, the Ministry of Interior has announced it will create 20,000 security-related jobs, apparently intended to be filled mainly by Shiite Bahrainis with college degrees. The protest movement, however, is unlikely to be satisfied unless there are political, not just economic concessions. Bahrain is an absolute monarchy where the senate is Sunni and court-appointed and both king and senate can over-rule at will the elected lower house. Because of gerry-mandering, although the Shiite party got 60 percent of the vote in the last election, it gained only 18 of 40 seats there.

9. Women, including journalist and human rights activist Tawakkul Karman, are playing a central role in the protests against long-time strong man Ali Abdullah Saleh in Yemen.

8. Although president Saleh again refused to step down this weekend, several prominent members of his ruling Congress Party resigned in sympathy with the protest movement.

Aljazeera English reports on the resignations:

7. Some 5000 leftists and Muslim activists were able to protest in Amman, Jordan this weekend because the Jordanian cabinet has amended the Public Gatherings Law to allow peaceful assembly without prior government permission. Five other parties have put rallies on hold while they pursue political dialogue with the new prime minister, who was brought in to replace his unpopular predecessor as a result of the protests.

Aljazeera English reports on Jordanian calls for a constitutional monarchy in that country.

6. Sultan Qaboos of Oman has sacked three cabinet ministers and ordered the creation of 50,000 public-sector jobs under pressure of protests by oil workers in cities such as Sohar. This weekend oil workers in Haima demanded more government investment in their area, which is remote from the capital.

5. Tunisia’s provisional government has laid out a road map to the future, under pressure from continued protests. A constituent assembly will be elected this summer and a wholly new constitution will be drawn up by elected representatives of the people. This past week, protesters forced the resignation of the prime minister, as having been too close to ousted president Zine El Abidine Ben Ali.

4. Egyptian protesters stormed the HQs in Cairo and Alexandria of the State Security Police, the dreaded secret police who used arbitrary arrest and torture to keep strong man Hosni Mubarak in power for decades. They said they had been afraid that security officials would shred documents implicating them in crimes, and they carried off many documents. Some were former prisoners who had been tortured in the cells of the building they invaded.

3. The invasion of the security police HQs forced Egyptian Prime Minister Essam Sharaf to replace Mubarak crony Mahmoud Wagdi with Mansour al-Issawi as minister of Interior (the cabinet ministry in charge of police).

2. Former feared Egyptian Interior Minister Habib Adly, who had served since 1997, has gone on trial for alleged human rights abuses.

1. Libyan rebels precariously extended their sway to the oil and refining town of Ras Lanuf, launched a fierce firefight in the capital of Tripoli itself, and fought off three concerted attacks on the western city of Zawiya, as well as fighting off an attack on the large western city of Misurata / Misrata.