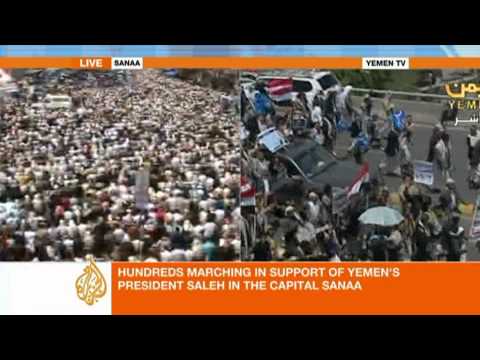 1. Syria: In the biggest day of protests in Syria so far, tens of thousands of Syrians demonstrated against the Baathist state of Bashar al-Asad on Friday. Large crowds came out in the Douma suburb of Damascus, but were prevented by the tear-gas and the batons of the Syrian police from reaching the center of the capital. In the southern city of Deraa, which has been the epicenter of Syrian unrest, 20,000 are said to have rallied against the government. Crowds also chanted in the streets against the government in Latakia, Homs, Banias and Jassan, as well as in the Kurdish areas. There were few casualties on Friday in Syria, which AP suggests may have reflected a regime strategy to minimize deaths of protesters.

2. Yemen: Hundreds of thousands of Yemenis demonstrated throughout the country, in Sanaa, Taizz, Hudeida and Ibb. The biggest rally was in Taizz, where Yemeni security forces fired on the crowd and wounded eight demonstrators. In the capital of Sanaa, there were dueling demonstrations of supporters of President Ali Abdullah Saleh and his detractors, but the pro-government protest was smaller and only comes out for a short period every Friday afternoon. In the rest of the country, large anti-Saleh crowds were the only ones in the streets. The opposition said mid-week that it was setting a two-week deadline for Saleh to step down.

3. Aljazeera Arabic is reporting a demonstration in downtown Baghdad demanding the resignation of Prime Minister Nouri al-Malliki. It alleges that large crowds came out in the northern city of Mosul to demand the immediate withdrawal of US troops.and the release of political prisoners. The Baghdad demonstration was probably Sadrists, Shiite followers of cleric Muqtadaal-Sadr. The one in the northern, largely Sunni Arab city of Mosul reflects ethnic discontents with the Shiite- and Kurdish-dominated government the US brought to the country, and the widespread lack of due process or speedy trials for Sunni Arabs taken into custody by Iraqi troops, some of whom have a background in Shiite militias.

4. In Amman, Jordan, 1000 or so dissidents gathered downtown Friday to demand the resignation of the prime minister and greater democratic freedoms. In the nearby city of Zarqa, a small demonstration of about 400 was mounted by the Salafis or Muslim fundamentalists, some of them followers of Abu Musab Zarqawi, the notorious terrorist. They were attacked by a counter-demonstration supporting the king.

5. Saudi Arabia: Altogether about a thousand protesters rallied in the eastern Saudi city of Qatif and in the nearby village of Awamiyya. They were protesting the crackdown on Shiite crowds in Bahrain, their own lack of religious freedom, and also the continued detention of protesters arrested during earlier. Police watched them closely but did not crack down.

6. The Bahrain government has backed off its plan to dissolve the Wifaq Party and one other. Wifaq is the largest Shiite party in the small Arab sheikhdom, representing the some 60% of the citizen population that is Shiite. It was gerrymandered into only having 18 of the 40 seats in the elected lower house, however. Its members resigned en masse to protest the use of violence by the regime against protesters. The protest movement, which was not wholly Shiite, had sought democratic reforms in Bahrain, though some small parties did call for the overthrow of the Sunni king, an absolute monarch. It is thought that American pressure caused the government to rethink its plan to ban Wifaq.